A turkey's hell for 'thank you' 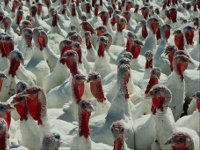 Barack Obama has recently pardoned two turkeys that were supposed to be eaten on Thanksgiving Day. Those, who listened to Obama's speech, giggled when the president predicted a happily ever after for the two birds.

When a roasted turkey graces a dinner table, few people wonder, what the bird had to endure during its short life. The Humane Society of the United States conducted its own investigation to find out what it feels like for a turkey.

The Humane Society was established in 1954. This is the largest public organization in the United States with over 11 million followers. The goal of the society is to improve the laws in the field of criminal penalties for mistreatment of animals, to help animals at animal shelters, rehabilitation centers and mobile vet clinics.

The undercover operation was conducted at Willmar Poultry Company in Willmar Minnesota. Willmar is the nation's largest hatchery that provides 30 million turkeys to farms and poultry-packing factories every year.

It would be silly, of course, to expect that employees of Willmar Poultry Company to treat their poults like they do in TV commercials, kissing them good night and arranging pink ribbons on their necks. The real picture is far from being a TV ad - it is shocking.

Soon after hatching, hundreds of poults are tossed onto the conveyor belt where they are sorted according to their sex. Afterwards, the newborns have to experience the first torture: workers grab the poults from the conveyor belt and chop off their rear toes which help the birds to keep balance when standing. A poult is then tossed into a large chute for another circle of bird hell.

Many poults die as a result of such brutal procedure. Those, who stay alive, will suffer from cardiovascular and musculoskeletal diseases throughout their lives. If only turkeys had brains, they would have jumped into a mincing machine during their childhood.

Afterwards, the poults are put into the rotating machine. They are hung by their necks, and then a laser burns off the ends of their beaks. While all this is happening, the poults are struggling, trying to escape from the hot light.

After the operation, the poults are placed into boxes, 100 poults in one box. The dead or dying poutls are tossed into a grinding machine. HSUS investigators could see that the employees of the company were treating the poults like potatoes, paying absolutely no attention to injured poults or those that fall on the floor.

HSUS officials say that there is no federal law in the USA to regulate turkey's rights.

"It's unacceptable for workers to leave injured and nonambulatory animals to suffer on the floor for hours on end, only to then send them to their deaths in a grinder. Our latest investigation exposes a callous disregard for animal welfare in the turkey industry, including practices such as grinding alive sick, injured and even healthy but unwanted turkeys," Wayne Pacelle, president and CEO of The Humane Society of the United States stated.