Notes from hell: A story of Holocaust 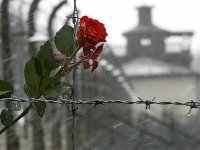 At a recent seminar held at Gratz College, the story of Esther was first heard by over 400 educators who gathered at one of the most unusual lesson - a lesson that is probably impossible to comprehend, so horrific it seems to us now, several decades later. The daughter of Esther Tuzman who died in 2009 at the 88th year of her life gathered like-minded women to pay tribute to the memory of her mother and tell of the horrors of the Holocaust.

The story of Esther Ani Tuzman was recorded in 1995, but it was decided to reveal it just now. Seminars dedicated to the Holocaust are held now not only by the families of the victims. The state of New Jersey, for example, in 1994 introduced this topic as mandatory for all students, and in Pennsylvania the students have been taught about the Holocaust since 1996. In addition, the information on massive repression can be found in the Goodwin Holocaust Museum and Education Center in Cherry Hill.

The audiotape where Esther tells the story of how she survived the war left the audience sobbing. After fleeing from her native village, Esther was wondering around seeking shelter. In the woods next to Krasnystaw she found her brother, but for security reasons, so as not to attract too much attention and not to arouse suspicion, they had to go separate ways. Esther later learned that her brother did not survive.

A young Catholic farmer helped Esther to hide, but her temporary home was far from peaceful. The girl could not sleep, fearing that in her sleep she may say something in Yiddish. Plus, it was difficult to sleep in the dirt basement of a barn. Once, during a short walk, she saw that the farmer who gave her shelter was inspecting plowed fields. "I was praying to God that he gave me the opportunity to see this crop, but I did not believe that this will happen," says the recorded voice of the deceased woman.

When Esther's rescuer told her about the capitulation of Nazi Germany, she, oddly, did not feel joy. She simply had nowhere to return. However, the little Jewish girl had a happy future awaiting her. She came close to a detachment of Polish soldiers, and met with Arnold, who later became her husband. In 1947 the couple immigrated to the United States, settled on a farm and established family business.

Arnold, incidentally, also attended the lecture. "We are here to refute the position of those who deny the Holocaust, and tell about it to those who will be able to convey our ideas further," the voice of the 87-year-old man was trembling with emotions. One of the organizers of the seminar, Nechama Tec, the author of the book "Defiance" about Jewish Resistance in Eastern Europe during World War II, recalled the story of his own survival. "We were only able to escape because our parents had a clear plan for survival. Of the 40,000 Jews who lived in the city of Lublin in 1939, by 1945 only 150 people remained. There were only three two-parent families, including ours."

Family members of Tuzman have no doubts that Esther would have approved of their decision to organize such workshops. "My mother would have liked it that we draw attention to this issue, and that her story has found a response among so many people," noticed Ani. "Teachers will return to work and talk about what they heard to their students, and the courage of survivors will inspire a new generation of anti-fascism."