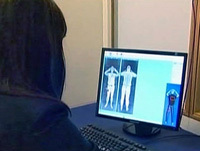 A government's care of its citizens may backfire. More precisely, it has already backfired. The scanners used to equip the airports around the world are already compared by researchers to the terrorists' weapons, with the only difference that the bomb blasts kills instantly, while death from radiation emitted by a scanner has a delayed effect.

The controversial machines appeared in a number of airports recently, but opponents of the security measure are already in full protest against exposing citizens to radiology. Security issues, doctors complain, were being solved under time constraints, and many aspects were simply not taken into account. The main argument the doctors bring up is that the chances to die in an explosion on board the plane are equal to those to die in a hospital of a radiation exposure.

The probability of both of these occurrences seems insignificant. Scientists have calculated that it is one case in thirty million (the likelihood of dying from a lightning strike is approximately ten times higher). However, a technological factor comes into play as one day the scanner may fail, and then the dose of radiology may increase multiple times. Even a working scanner carries a hidden threat: the producers tend to lower its radiological indicators, either intentionally or due to inaccurate measurements.

A scientist with the University of Arizona adds that the skin is the most sensitive organ to radiation. In scanners the radiation dose is emitted at a minimum, however, when a scanner beam is focused on one particular area of the body, the radiation can be twenty times stronger. In addition, the developers of the scanners did not explicitly take into account that people with genetic disorders will also have to go through security checks. Such people account for one in twenty. For them, a scanner exposure is equal to eating arsenic for breakfast, as the effect on the body will be approximately the same.

Respective American agencies responsible for the technology have already conducted a second inspection of the scanners, but their conclusion was not gratifying for the scientists: the devices were found "compliant with high standards of safety."

Dr. David Brenner from the center of radiology at Columbia University said: "Each year, eight hundred million passengers go through the airports and, accordingly, scanners. A small potential risk of radiation exposure multiplied by a large number of screened people results in a very real threat to society."

In turn, the U.S. Office of Civil Aviation, Department of Transportation and the Health Protection Agency have assured that one X-ray performed at a doctor's office is equal in strength to five thousand passes through a scanner at the airport. And obviously, public safety and protecting citizens from terrorists is above all else.