NATO Summit, the Georgian Committee and the 80 prostitutes

Allegations arise in Portugal that last Friday the committee of Georgia celebrated its stay at the NATO Summit in Lisbon by holding a raucous party with eighty prostitutes in its luxury hotel. Is this how NATO spends its money? 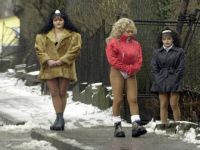 The allegations appear in one of Portugal's main daily newspapers, Correio da Manhã, which claims that the Georgian Committee contracted eighty prostitutes for a raucous party, which went wrong when there was an "incident" with one of the girls, who was identified by the authorities responsible for the security of the event.

The allegations also claim that the party was so noisy that French President Nicholas Sarkozy, staying at the same hotel, complained to the management which was forced to ask the Georgians to make less noise and the party ended earlier than expected.

The same newspaper identified the hotel as being one of the most expensive and luxurious in Lisbon. In the event that the allegations are true, is this the proper way for the representatives of the Georgian authorities to behave? And is this how NATO spends its money?