Conservatives versus the "left": the business of television journalism 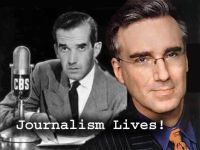 At least one curious thing happened in the past week in television journalism in the United States. Keith Olbermann, the most radical among all opinionated anchors - considered leftist by MSNBC - was suspended for having made financial contributions to Democratic candidates in the election of November 2.

Under the regulations of the station, he violated internal rules that do not allow for partisan donations, apparently because they characterize a position. Now surely these rules should already be a dead letter for a long time, since the stations MSNBC and FOX have abandoned their commitment to broadcast news without bias and turned television journalism into a profitable business based on the opinion of Olbermann, Rachel Maddow and Chris Matthews (MSNBC) and Glenn Beck, Sean Hannity and Bill O'Reilly (FOX).

These six anchors, commentators, journalists, or whatever name one wants to give to the role they play, today turned into weapons in the war between the two organizations that reap big profits with their decidedly partial analyses and comments. Each of them opted for winning a segment.

FOX, with Australian magnate Rupert Murdoch, is the blatant and openly Republican relentless opposition to the Obama government. Apparently it leads the race among the news outlets of cable TV for the audience. A 2009 survey indicated that the station's signal went into 102 million American households. Commentators have had substantial involvement in the recent Republican victory in the mid-term elections.

On the other hand, MSNBC moves - that emerged from a partnership between Microsoft and NBC, although today Bill Gates' company has only 18% of the shares - decided to invest in public Democratic thinking and their anchors are considered "left." In 2009, it was seen in 78 million homes.

For the public, there is the possibility to choose the news according to their personal taste. If you wish to view the news with a reasonable prospect of objectivity and credibility, you will not find it in these two cable TV networks. Neither of them will disguise or attempt to pretend. They are unapologetically right / conservative / Republican, and left / progressive / Democrat. Both winning big with the business of television journalism. The viewer hears what they want to hear.

For that very reason, when Olbermann, who is the head of a million viewers every night on MSBNC, was suspended for making contributions to Democratic candidates, it sounded like an inconsistent attitude from the station whose revenue is based on the opinion directed exactly by its journalists. It seems, however, that MSNBC bosses realized their mistake in time, especially since an Internet petition gathered 600,000 signatures supporting Olbermann. And the suspension that was, in principle, for an indefinite period lasted only three days.

If the reader asks me if there is any similarity between that sort of "journalism" as that practiced in Brazil, I would answer with absolute certainty that there is none. MSNBC and Fox shamelessly treat the news as a business. Point.

In Brazil, Globo, for example - I cite it only because the others are not even a reference in terms of audience - it deceives the viewer every day pretending to be unbiased, when in fact, it knowingly publishes material in accordance with their convenience and commentators are paid to be the voice of the owners. None of them has the chest to contradict it, which should be no problem for them because it seems they think the same way.

Brazilian viewers, therefore, are left to live with the tricks and / or commercial and political interests of Globo, who played hard and heavy against the Dilma candidate throughout the campaign, and who appeared docile and friendly with President Dilma in the publication the next day about the election.