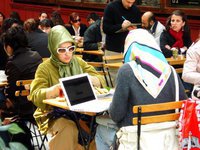 Chechen President Ramzan Kadyrov called on to protect the youth from the influence of radical Islamist websites recruiting illegal armed groups. Paradoxically, these days even the representatives of religious denominations who believe that the "global net" is a sin, preach on the Internet.

"The main danger comes from numerous sites, most of which are registered in Europe. On these sites Pseudo-Islamist scientists are recruiting young people into the ranks of the Wahhabis. We need to do everything possible to protect the young from the virtual influence of extremists," the leader of Chechnya said at a meeting in Grozny, as reported by RIA Novosti referring to the press service of Kadyrov.

As noted by the President of Chechnya, "There are many websites devoted to the subject of Islam. People visit these resources and feel that they benefit from them, that they study the basics of Islam, but each of these sites interprets religion in its own way, sometimes deliberately confusing people, instructing them to take the path of radicalism." Ramzan Kadyrov emphasized that on the so-called "Islamic" sites people who are trying to interpret the Quran have no proper education and hence distort the essence and the true meaning of the sacred book of Muslims.

"Islam forbids random people to interpret the Quran. Their interpretations become available to a wider audience of users through the Internet and can cause considerable damage to the Islamic religion. Young people should know this to avoid becoming a victim of someone else's manipulation," continued the head of the republic.

According to the spokesperson of the Council of Muftis of Russia (CMR) Gulnur Gaziyeva, prevention of the involvement of young Muslims into extremist groups via the Internet is possible, "through greater education both on the Internet and in in the mosques, educational and outreach institutions."

"The fact is that when there are open formal education institutions with their own mode of operation, when the youth has a place to go, young people may be interested, directed, informed," she said in an interview to Pravda.ru.

As noted by Gaziyeva, "in this chaos, due to the lack of mosques and facilities for educational purposes experienced by the Muslims, we may lose a part of our youth." "Adolescence, late adolescence, is the age of the strongest maximalists, fighters for justice. They can be affected and convinced in every possible way. These are the people who can be inspired, and we are in danger of losing such young people," said the spokesman of CMR.

"Clearly, we need to ban extremist websites, but it is very difficult to do. This is a dream that is nearly impossible to fulfill. The only way out is to counteract it by promoting moderate Islam, which is inherent in Russia," she believes.

According to Press Secretary of CMR, there are no Islamic theologians who would consider using the Internet a sin. "We have not heard of those," she said.

At the same time, the Orthodox residents of Russia ten years ago believed that the Internet presents a threat as a tool of globalization. Many people refused to have a computer at home and a job where computer use was inevitable on religious grounds.

Cautious attitude towards the Internet as a social entertaining tool, provoking rampant of human passions, by no means should be regarded as a misconception of a narrow circle of Orthodox fundamentalists and marginal elements. Such well-known and respected theologian as Metropolitan John of Pergamon (Zizioulas), an associate of the Ecumenical Patriarch Bartholomew in one of his works calls Orthodox monks to refrain from using the Internet.

Greek-speaking Orthodox Churches are far less liberal towards the Internet than those in Russia. Many well-known monasteries have their own sites, and the inhabitants are not encouraged to use the worldwide network. It is believed that this is incompatible with monastic seclusion.

Orthodox Internet today presents a completely post-modern picture. For example, there are entire forums whose members serve as fighters against liberalism and modernism in the Church and condemn such practices as Orthodox mission of preaching at rock concerts or bike shows. But at the same time, none of them think that they get involved with the "liberal and modernist phenomenon" of the World Wide Web, which is in no way compatible with the position of "purists faith." The only thing that justifies the presence of Orthodox user on the Internet is the need for the mission the methods of which cannot be "more godly" than at a rock concert or other informal get-together of young people. And if you deny the necessity of the mission, which the "zealots" do, the very fact of their presence on the web loses any justification.

However, the Orthodox youth, as well as Muslim youth, experiences an acute lack of legal and official premises where they could be presented with the canonical church doctrine, not the on-line post-modern eclecticism.