Phobias and psychoses of modern women 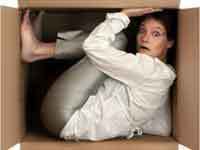 The rhythm of modern-day society requires a lot of spiritual and physical energy. People do not seem to able to cope with daily stresses, which gives rise to various phobias and psychoses. Many of such phobias did not exist in the beginning of the 20th century. The most widespread manias of modern women are orthorexia (obsession with healthy food), workaholism and a mental disorder known in Russia as Plyushkin's syndrome.

The Plyushkin syndrome, described in Nikolai Gogol's classic novel "Dead Souls," existed from times immemorial. It goes about the people who develop an obsession for accumulating useless objects - old newspapers, broken furniture, ragged clothes, etc. Nowadays, the list of such objects continues with broken electronic devices that get piled up in people's apartments and houses.

Those women, who have the Plyushkin syndrome, never throw anything out. They keep bringing useless things home thinking that some day all of them may come in handy. Plyushkin women keep old clothes that they are never going to wear, piles of expired cosmetic products...Psychologists categorize such a form of gathering as an alarming mental condition. The syndrome is connected with subconscious phobias and represent a serious form of a mental disorder.

Workaholism is another dangerous phobia of modern days. The term was invented by American psychologist Wayne Oates, who put two words together - 'work' and 'alcoholism.'

Workaholics work day and night without any days off. They prefer work to family and personal life. Addiction to work has nothing in common with hard working or making money. A workaholic has no goals at all. It is not the result, but the process that is important for them. Work is like a psychological screen that a person uses to protect themselves from social problems.

Orthorexia - a fixation with healthy or righteous eating - is a new kind of mania. Ladies eat strictly according to a special schedule and menu. If they are invited to a party, they can even bring a bag of their "healthy food" or a bottle of "ecologically pure" water along. Swedish psychologists say that the addiction appeared as a result of mass media propaganda. Countless publications all over the world constantly carry stories about healthy and unhealthy products as well as rejuvenating and weight-loss diets.

The addiction to gambling is as old as time. The development of the gambling industry in the world has made the mania take a horrific global scale. The number of gambling addicts in the USA alone has exceeded 30 million. They include even elderly ladies who gamble wearing diapers not to waste time on bathrooms.

Internet has led to the appearance of a whole variety of manias and addictions. Many modern women become addicted to computer games, social networking, chat rooms, discussion boards and other things.

Addiction to sending text messages is another disaster. SMS addicts check their cells every minute and send messages all day long. Psychologists say that modern people are scared of getting lost in the modern society, so they need to constantly realize their own importance and significance to others. "If other people need me, then I'm ok," this is what such people have in minds when receiving and sending text messages.

Addiction to TV is not a rare phenomenon either. When coming home after work, a "patient" turns a TV on and watches it the whole evening before going to sleep. If a TV addict is deprived of the possibility to watch TV, they may develop a serious depression and even commit suicide.