Marriage to become prerogative of religious people only? 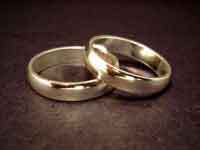 It is an open secret that the Church recognizes only one form of close relationship between a man and a woman - legal marriage. A growing number of people believes nowadays that tying the knot is not a necessity at all, because two people can love each other and live together without paper formalities. Will marriage become a prerogative of religious couples only some time in the future?

According to Church teachings, marriage and love in marriage lay the foundation of family relations. All other forms of family love spring from this foundation: the love of parents to their child, the love of a child to their parents and the love between siblings. If there is no marriage, then there is no family.

A Christian marriage is peculiar for its purity, perfection, spirituality and holiness. A Christian marriage, as a unity between two people, is a union between a man and a woman. If God had wanted a man to change his wives, he would have created one man and many women. Marriage curbs desire and lust. A husband and wife comprise one living organism. A dissected organism dies just like the conjugal union loses life and its significance if contracted for polygyny and polyandry.

Christian marriage commits husband and wife to pure Christian love, which is more than just a feeling. It is a deep union, and two people in the union have to take efforts to keep it alive.

French philosopher and author Gabriel Marcel once said: "To say "I love you" is to say "For me, you will never die."" For Christians, marriage is not a piece of social structure. It is a state when two become one - not just for some time, but for good. According to Christian teaching, marriage cannot be terminated because it is God himself who ties husband and wife together.

These days, people tend to simply live with each other without contracting marriage. From the Christian point of view, this trend jeopardizes the existence of institute of family and contributes to the universal degradation of the society. Living in sin is considered absolutely normal and acceptable in many countries today.

Those, who choose to live together without marriage, prefer not to restrict their freedom and independence. It gives rise to instability of family life and affects the relationship between partners and their children.

Outside marital unions, children may often be born incidentally, by mistake. Many of such children suffer from the lack of parental affection throughout their lives. Moreover, pregnancy often leads to abortion with unmarried couples. For married couples, the birth of a child is a fruit of their love.
The growing number of unlegalized unions means that more and more people share negative attitude to marriage nowadays. Many think of marriage as something old-fashioned, a burden that deprives them of their freedom. In addition, modern-day people tend to share positive attitude towards the freedom of sexual communication outside marriage.

However, despite the above-mentioned situation, one has to admit that it is only marriage that pushes the development of morally healthy relations in the union of two people. Marriage and family make the foundation of healthy society. Those, who do not understand the meaning of marriage, risk both their own happiness and the future of their nation.