No mere mortal can resist the evil of the thriller 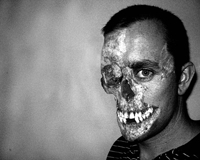 Halloween is here, and all evil spirits are in a hurry to attract public attention. Vampires are burning books on city streets and demand respect of their rights, and the dead are getting out of the ground. Americans are, apparently, accustomed to everything, so the appearance of zombies who were successfully promoting a new series in New York on October 26 did not scare anyone.

Zombies enjoy wild popularity in America, and even vampires cannot compete with them. At least, there are significantly more movies featuring the living dead than those featuring fanged aesthetes. There is even a black comedy a zombie who turns out to be the best head of the family. A comedy about zombies being used as free labor shows the warm and friendly attitude of the public to the walking dead. They are in such a great demand that they were even recently "embedded" in the classics when a book was published called "Pride and Prejudice and Zombies."

Zombies evolve, and it was the black comedy genre that started this evolution. These films were the first to present zombies as unattractive, but kind creatures. Well, not quite kind, but rather, remarkable.

The first horror movies and books about the walking dead were a resounding success. As a result, zombies are literally everywhere now - on television, in computer games, and comic books. Children play zombie games and dress accordingly for Halloween. And adults, too, want to play the walking dead. Different cities hold regular "zombie parades" that look like carnivals with sepulchral themes. On October 26, corpses appeared in the streets again - this time in 26 cities around the world, including not only American Washington and New York, but also Madrid, Munich, Athens, Rome, Belgrade and other cities.

American TV channels AMC and Fox came up with a PR-action. They are promoting a new series "The Walking Dead" which premiered exactly on October 31. This was a gift to those who have temporarily turned over to the side of Darkness, but are not willing to leave home and get off the sofa. The series will be broadcast in 120 countries. Russia will broadcast the series as well, but with a slight delay - the first episode is to air on November 4, when all the witches will have put their brooms in a pantry and all pumpkins are thrown away (or used for cooking).

Generally speaking, promotion of films is another story. Everyone remembers the trailer for the movie "Wanted" which literally shook the Russian Internet. And all because people thought it was shooting of the actual events where a poor manager finally gone mad and smashed his own office.

The appearance on the streets of various dressed-up figures who seem to be amusing the public, but in fact are advertising to the masses, has been successfully practiced for a long time. For example, several years ago a bunch of snowmen marched on the streets of St. Petersburg with the posters stating: "Give Us Snow!" The march was a huge success and was covered by all major media, which means the PR event was a hundred percent successful.

Costumes are used not only by trademarks, but also social movements. Recently Moscow supermarkets were introduced to "Piggies." Dressed as pink pigs with evil mugs, a youth organization activists were covered not only by Moscow but also regional newspapers and all central channels. It is unlikely that the fighters against supermarkets selling stale products would have enjoyed such success if they have chosen to protest without costumes. Piggy costumes - and the entire country is discussing them on blogs.

Movie advertisers are successfully using this God-given tool. When Shrek was released, real donkey races were organized which have attracted the attention of the media and public. While speaking about donkeys, it would be worth mentioning a PR campaign that took place last summer, which would be worth putting on the list of the most horrible campaigns ever.

This was the infamous flight of a donkey over a beach in the city of Anapa on the Black Sea. Local businessmen who organize skydiving on the beach launched a donkey in the sky. The businessmen could hardly expect such a result. Virtually all the world's largest media outlets wrote about this case of mistreatment of animals. The donkey named Anapka became a global celebrity. One British newspaper has organized fund-raising and bought Anapka from its owner for a hefty sum. Then the donkey was taken to the Kremlin riding school, and after that the new owner planned to take it to England.

Zombies, especially on Halloween, look quite fine. It would not have been a big deal if not for the scale of the event where 26 cities around the world have participated. On the night of October 30th many clubs, including those in Russia, will be filled with dressed up creatures, pumpkins and other infernal beauty. Most likely, there will be plenty of zombies.