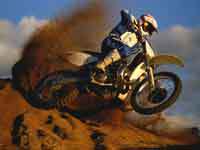 Most people all over the world perceive sport as a celebration of human energy, power, healthy lifestyle and good mood. Unfortunately, sport has a downside: it can be very dangerous. What makes people dedicate their lives to sports? Is it all about making money, or are gold medals priceless? Needless to say that people have different goals, but all athletes walk on thin ice.

Motorsports and racing are the two most dangerous kinds of sports. Formula One claims the average of one life every year. The number of deaths on motorcycle tracks is a lot higher. Any experienced racer has been to at least one major accident and suffered two or three severe injures.

Boxing take the second position. In 1997, Mike Tyson bit Evander Holyfield's ear, which became a legendary trauma in the world of professional boxing.

Wrestling follows boxing on the list of world's most dangerous sports. Professional wrestlers suffer knee, shoulder and elbow injuries most frequently. The traumatic index in wrestling is 103, which means that the average of 103 from 1,000 people suffer injuries every year. Equestrian sport comes next with the index 101. Falling off a horse may lead to life-threatening injuries.

Snowboarding and mountain skiing come fifth. Steep slopes and dangerous stunts may often result in arm and leg bone fractures. As opposed to skiing, snowboarders may injure their wrists (23% vs. 4%) and ankles (17% vs. 5%), but they have smaller risk of suffering knee injuries (16% vs. 38%).

Rugby, a hugely popular game in England, comes next. Rugby is a purely men's game, and tough games lead to tough consequences for players. Up to 60 percent of all injuries suffered in rugby are related to the traumas of lower parts of the body - mostly concussions and spraining. The most serious trauma in this sport is a rupture of crucial ligaments. Traumas of the upper part of the body in rugby make up to 30-40 percent: finger and shoulder dislocations, as well as collarbone fractures. Jean de Villiers, a South African rugby player, suffered an unusual trauma in 2007 as he injured his biceps.

Water sports - diving, swimming and highboard diving - come next. Diving is a young sport, but it can be extremely dangerous. Equipment malfunction, oxygen shortage and other emergencies may lead to serious injuries and even lethal outcomes. As for swimming and highboard diving, an athlete may hit their head on the bottom of the swimming pool and suffer a serious cranial injury. US open water swimming champion Fran Crippen died during a 10-kilometer race in the United Arab Emirates.

Skydiving and its variations including BASE jumping come eighth. BASE jumping grew out of skydiving. BASE jumps are generally made from much lower altitudes than skydives, and a BASE jump takes place close to the object serving as the jump platform. Starting in 1981 and as of May 9, 2010 there have been at least 147 fatalities related to the sport. BASE jumping is one of the world's most dangerous recreational activities, with overall fatalities in 2002 estimated at about one fatality per sixty participants. Another study reported the fatality risk as 1 in 2,317 jumps over the period 1995-2005 in Norway only.

Surfing takes the ninth position. Big waves entail big problems, including shark attacks. Surfing, like all water sports, carries the inherent danger of drowning. Other dangers include collision with sand bars, rocks, reefs and even other surfers. A large number of injuries, up to 66%, are caused by collision with a surfboard (nose or fins). Animals such as sharks, stingrays, seals and jellyfish can sometimes present a danger.

The list does not end here, of course. It can continue with other extreme and dangerous sports such as parkour, trial, kite surfing and many others. Many new extreme sports appear and gain popularity with young people, who may often be reckless in their games with death.