The Pakistan floods have left enormous areas of the country uninhabitable, have destroyed thousands of homes, schools, rendered millions of people destitute and have eradicated the livelihoods of millions of people. Yet there is a warming human side to this story. 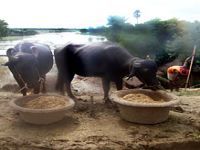 The International Fund for Animal Welfare, an international animal welfare organization, whose President Fred O'Regan is based in the United States of America, has been working with the Ravi Foundation, based in Pakistan, and its supporters have provided 90,000 USD to buy feed for 16,000 animals.

This cooperation among the international community and the Pakistan-based Ravi Foundation has brought happiness to countless Pakistani families. Not wishing to diminish the importance of the worst floods Pakistan has experienced for a century, the effects of which are still being felt today, there are good news stories and the international cooperation element is certainly newsworthy. Friendship, not enmity, has brought tears of happiness to the eyes of Pakistani farmers.

IFAW's generous contributions have provided wheat bran, wheat straw and high-protein-mix feed packets to provide lifesaving nourishment for starving animals across Pakistan. Apart from this, 1,000 families have been provided with food troughs for their animals and others, with girders to rebuild animal accommodation.

IFAW President Fred O'Regan explains: "One theme that has emerged over and over from our emergency responses is that by helping the animals, we are also helping the humans. It's a wonderful reminder of the special bond we have with our animal companions - they are truly members of our families, providing unwavering friendship and love".

The warmth of the human bond with animals cuts across cultures and races and creeds and continents and cultures. Among some of the success stories sent to us by IFAW, we would like to highlight the following as examples of how human solidarity can transcend horrific situations.

"If not for the feed we received from IFAW/Ravi, the newborn calf would not have survived"

These are the words of 48-year-old Muhammad Bashir Ahmed, South Punjab, who explains that he had four buffalos when the floods stuck, one of them pregnant. Deciding to get to the city embankment in Layyah, "my wife and children took...three of the buffalos and reached the embankment in about three hours. I stayed with my pregnant buffalo and walked slowly, reaching it in about six hours".

"Soon after, everything was under fifteen feet of water, we were stranded there on the embankment for two weeks. The government dropped food and water for the humans but there was nothing for the animals, and they were getting weak....On the first of September my pregnant buffalo gave birth to her calf. She was so weak that she had no milk for her baby".

"My buffalo is not just an animal. She is my whole world. She is my friend"

Jinda Mai, 58, had one buffalo and no money to pay the boat people who came to rescue her. "She begged but to no avail," states Fred O'Regan, adding that "She refused to leave her place and her buffalo and she stayed there for two days without any food or water". Pakistani troops eventually rescued her and her buffalo. Explaining her solidarity, she said: "My buffalo is not just an animal. She is my whole world. She is my friend and I couldn't bear leaving her in flood water".

"My hungry animals all ate happily. When they had enough feed they played with each other"

Ghulam Fareed, expressing his gratitude at receiving feed for his animals under the IFAW/Ravi Foundation program, told IFAW: "I cannot express my feelings. When I got my first week's feed for my animals and fed my hungry animals they all ate happily. When they had had enough feed, they played with each other and enjoyed themselves".

A nice comment on a human tragedy, but also a story about people coming together to help each other out, and the telling statement that there are truly universal values, such as love and respect for animals and nature.