Apocalypse from WWF: All living beings on Earth become extinct 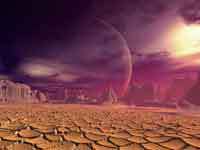 According to the report of WWF Living Planet, prepared for the opening of the UN conference on the conservation of wildlife diversity, which began on October 18 in Japan, the population of all living beings on the planet is sharply reducing, as humanity consumes 50% more resources than is resumed. But how accurate is this "apocalyptic" forecast?

The Living Planet report is published every two years and is one of the most quoted sources in the world regarding the condition of Earth. It is prepared by WWF in collaboration with the London Zoological community and a worldwide network of ecological footprint. The drafters of this document measure "health" of the planet using several indicators: Living Planet Index (state of populations), ecological footprint of humanity (natural resources), availability of renewable natural resources, the water footprint of manufacturing, etc.

So what do these indicators from the new version of Living Planet tell us about terrestrial biodiversity? In fact, nothing good. Studies have shown that the population of living organisms has decreased by 30% since 1970. Particularly adversely affected are tropical species: their populations have decreased by 60% in less than 40 years.

While in poor tropical countries biodiversity is reduced at an alarming rate, developed countries are living in an imaginary paradise based on excessive consumption and greenhouse gas emissions, said James Leape, director of the International Secretariat of WWF.

He was echoed by his colleague Vladimir Krever, a coordinator of biodiversity of WWF-Russia:
"The Palearctic region, to which Russia belongs, is the only one of the five terrestrial biogeographic provinces that has seen an increase in the index by 43% since 1970. However, in Russia animals such as the Amur leopard are still in critical condition, the extinct population of leopard in the Caucasus has still not been recovered; the number of polar bears has reduced sharply. "

Why does the number of species shrink so rapidly? Scientists primarily see this as a consequence of uncontrolled growth of the human population and expansion of their business activities. First, according to the researchers, leads to reduced food resources, while the second leads to the fact that they are no longer renewed.

Depletion of resources has already been noted in some areas, such as the depletion of cod populations off the coast of Newfoundland in the 1980s. When this happens, people usually move to new habitats of food sources, to new places of fishing or forest clearance for agriculture. Yet, at the present level of consumption, these resources will run out fast, and many ecosystems would collapse before they are used, the report states.

In addition, the growth of human population has led to the situation when we use the planet's resources 1.5 times faster than they renew. If humanity continues in the same spirit, by 2030 we will need the equivalent of two planets.

Needless to say, the numbers are certainly impressive. However, if you carefully study the methods of investigation, some doubts arise as to the correctness of the work conducted. For instance, look at the way the infamous Living Planet Index determining the state of biological diversity is calculated.

What is it all about? It is a coefficient calculated based on the data of evaluation of the condition of almost 8,000 populations of over 2,500 species of animals, plants and fungi.

This is roughly the same as re-creating a picture of the demographic situation in Russia with the population of approximately 140 million based on the studies of fertility and mortality in one remote village with the population of 20 retired individuals. On the basis of these data, we can make the direst predictions about extinction of the Russians, but they cannot be called true. And the results of the studies conducted by WWF, obtained by a similar method, are believed by everyone.

And what kinds of species were studied by the foundation staff? Basically, those that have been facing extinction since the middle of the twentieth century. Yet, the population of the most abundant species like Norway rats, red cockroaches and fungi escaped the research scope, probably because they would ruin the "apocalyptic" predictions.

Additionally, the amount of energy consumed by each inhabitant of our planet was calculated absolutely incorrectly. One gets the impression that the researchers simply divided the number of harvested resources by the number of people living on Earth. This completely ignores the fact that the overwhelming majority of mankind lives in less developed countries (Africa, East Asia), or falls into the category of people who do not have access to the benefits of civilization (Chinese peasants, slum-dwellers of South America, Bedouins of Arab "oil empire ").

It turns out that the majority of energy resources are spent by a very small part of humanity, which, incidentally, is not strongly involved in the growth of world population (it has been long known that indigenous people of the developed countries of Europe, Asia and America do not breed very actively). Therefore, it is at the very least erroneous to build a forecast for the depletion of energy resources based on the growth of human population.

The report has a few other areas that are weak from a scientific point of view. For example, the area dealing with the increase of greenhouse gases emission, whose harmfulness for the planet, to put it mildly, is very doubtful. One gets the impression that this report is not meant to find solutions in the environmental sector but pursues other objectives.

Perhaps this document will be used by those who are afraid of the rapid industrial development of some "third world countries." They may try to introduce certain international bans on the use of some technologies, which will exclude the emergence of new world leaders of science and industry in the near future. It is not ruled out that the goal is much more prosaic - to incite a global hysteria, and on the sly to ban the production of certain products and thereby eliminate the competition (as it was with the producers of Freon gas).

Gloomy forecasts of WWF should not cause fear because the impressive numbers cited in the report communicate no more than wrongly conducted studies.