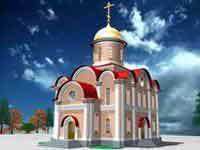 The dismissal of the Moscow mayor affected the religious life in the Russian capital. Orthodox activists urge the new mayor to keep Yuri Luzhkov's promise to build 200 temples in Moscow. Russian Muslims want new mosques to be built too. The people, who feel indifferent to religion, ask the Moscow authorities not to disturb their peace.

It is hard for Moscow Orthodox priests to exercise their virtue of benevolence. It is really hard for them to love people because the number of those who need the support of religion is larger than the number of priests who can provide such a support. A typical picture of festive church service in a bedroom part of the city is a crowd of people standing outside a church and listening to the liturgy in the street through loudspeakers. Parents, who bring their children to church for oblation, have to stand in the line for nearly an hour.

As soon as a liturgy ends, it is time to pay attention to those who order occasional services, such as baptism, wedding or burial ceremonies. There is practically no possibility to find out who all those people are, what they believe in and what makes them come to the church and why. One may endlessly preach that people must not, let's say, baptize their children without preliminary catechesis - the teaching of the basics of faith. How could this be brought into practice if dozens of people come to the church of their neighborhood every Saturday and Sunday?

There are friendly Orthodox communities in the center of Moscow. They were formed during the 1990s, when they joined their efforts to restore churches, to promote Orthodox faith, to celebrate church holidays, to organize Sunday schools, etc. All the people in such communities know each other very well. However, they do not accept new members, because every, even most friendly community, can not grow into a crowd.

One may say that no one makes anyone become an Orthodox Christian. If you consider yourself a Christian, then you have to learn how to reconcile. Wake up at 5 a.m. to be in time for the morning liturgy downtown, otherwise you will not get in. Pray outside in drizzling rain and heavy snowfalls. Learn to carry your baby and the stroller traveling from your remote neighborhood by bus and by metro. One could probably endure all that if the hardship returned peace to the soul. Is it worth it, though?

New temples in Moscow neighborhoods get overcrowded before they are actually built. Those, who think that the new temples will be empty, are wrong. Some people feel offended if they find out that they will soon have a new church built in their neighborhood. Such people normally say that they wait for years for a new kindergarten, a hospital or a sports facility to appear somewhere near.

"We have three churches here, but there is not even one kindergarten," this is what such people usually say. However, they usually build churches in industrial or deserted areas, where kindergartens can never be built. In addition, religious families have more children than non-religious families do. A family with three or four children is absolutely normal for an Orthodox community. Some may have eight or even twelve. Therefore, if they plan to build a church in a Moscow neighborhood, it may mean that soon there will be a new kindergarten, a new school, etc.

As for Muslims, there was secret understanding between the Moscow government and the Council of Muftis of Russia during Luzhkov's era. It was only the Council of Muftis that was allowed to build new mosques in the city. The situation may change when the new mayor comes to power, so the council has been trying to demonstrate the power of its community recently. For example, nearly 55,000 people came to Moscow's central mosque during Uraza-Bayram holiday.

However, many Muslims residing in Moscow do not have either the Moscow registration or the Russian citizenship. The council is currently in conflict with the Moscow authorities because the central mosque in the city is located very close to Moscow's central sports complex Olimpiisky (The Olympic Arena). The council wants to build a temporal prayer house on the territory, which the administration of the sports complex intends to use for building a parking lot. This is not a matter of suppression of Muslims or Islamophobia. Most likely, it goes about the material conflict.