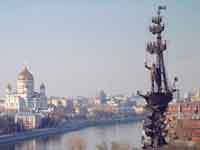 The new Moscow authorities intend to get rid of the controversial monument to Peter the Great by Zurab Tsereteli. Officials of the Russian capital put forward an idea to relocate the unusual monument, which most Muscovites find utterly ugly, to St. Petersburg. The government of St. Petersburg strongly rejected the offer and said that the monument should be simply dismantled and used as scrap metal.

The idea found its followers in other regions of Russia, though. For example, the mayor of Arkhangelsk, Viktor Pavlenko, said that the city would be glad to welcome the monument, which Moscow is so eager to get rid of.

"Taking into consideration the historical significance of Peter the Great and the contribution of Arkhangelsk in the development of the Russian navy, we are ready to consider the possibility of installing Zurab Tsereteli's monument in our city," Pavlenko said in a statement.

Arkhangelsk used to be Russia's only port city. The city was the place where Peter saw the sea and ships for the first time. The nation's first state ship-building company was founded in the city in 1693.

Deputies of the city administration of Petrozavodsk also put forward a suggestion to relocate the monument from Moscow to their city, Interfax reports.

"We believe that it can be fair from the historical point of view because Petrozavodsk, founded in 1703, was named after the first Russian emperor. The city is also one of the cultural centers of Russia's North-West. The monument to Peter the Great would match the embankment of Lake Onega," deputies of the city said in a statement.

Vladimir Resin, the acting mayor of Moscow, believes that the decision to relocate the monument to Peter the Great should be based on the opinion of Muscovites, first and foremost.

"It is not an official, but an art council that is supposed to make the final decision about it. And we have to ask Muscovites too," he said.

A source from the Moscow administration said on October 4 that acting mayor Vladimir Resin offered to remove the notorious monument from the center of Moscow. Moscow's chief architect Alexander Kuzmin was asked to find a different location for the awkward, yet gigantic creation.

Russian news agencies said that the monument could be relocated to St. Petersburg. However, the government of Russia's "northern capital" was not thrilled about the idea at all.

"We are certain that your subtle taste and your kind attitude to Petersburg will let you change your position on the matter," officials of the St. Petersburg administration said in response to the offer from Moscow. They also asked Moscow to use all possible resources and take all possible efforts not to let the monument vandalize the beautiful city created by the outstanding emperor, Pravda.Ru reports.

The chairman of the Legislative Assembly of St. Petersburg, Vadim Tulpanov, offered to simply dismantle the "ugly monument." The best thing to do for this monument is to junk it," the official said.

Experts and officials differed in their opinions about the relocation of the monument to Peter the Great. Some said that the procedure was too expensive and would cost Moscow from 6 to 10 million dollars.

Zurab Tsereteli, the creator of the controversial monument, believes that the idea to relocate his work is shameful to those who initiated it. The architect pointed out that the erection of the monument in Moscow was approved by the people who now want to have the monument removed from the city.

The 98-meter-high monument to Peter the Great designed by Zurab Tsereteli was erected at the confluence of the Moskva River and the Obvodnoy Channel in 1997. The monument, made of stainless steel, bronze and copper, weighs nearly 600 tons. Rumor has it that Tsereteli originally created the gigantic sculpture in 1991 as a statue of Christopher Columbus. Tsereteli supposedly tried to find home for his creation in the USA, Spain and in Latin America, although to no avail. The sculptor eventually turned his work into the monument to Peter the Great and timed the erection of the gigantic creation to the 300th anniversary of the Russian navy.