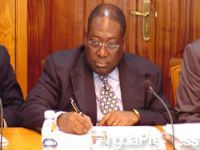 The president of the Angolan National Assembly, Antonio Paulo Kassoma, traveled to Russia today to start an official one week visit in order to strengthen relations between the parliaments of both countries.

Before his departure to the European country at Quatro de Fevereiro (February 4th) International Airport in Luanda, Kassoma said goodbye to the vice president of Parliament, John Lawrence, and civil servants of this government agency.

Invited by his Russian counterpart Boris Gryzlov, the Angolan parliamentary leader will develop an intense agenda, which includes contacts with representatives of the Duma (Russian Parliament) and government, according to a press release issued here.

A meeting with Russian Foreign Minister Sergei Lavrov, and visits to museums and the Kremlin National Park in Moscow are also to be part of the program of the visit.

Angola and Russia have maintained relations in various fields for many years.

The resumption of ties between both countries was held last June, with a visit to Angola by the Russian president, Dmitri Medvedev.