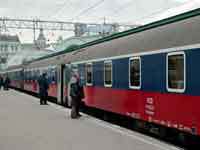 Last week, after a 96-year break, a train to Nice took off from the Belarussky train station in Moscow. The Russian Express was greatly welcomed at Côte d'Azur, but the passengers were asked the same question:"How do you feel about wasting that much time and money?" The Komsomolskaya Pravda reports. Europeans, accustomed to high-speed trains, were wondering why one would want to ride through 22 cities for two days, if the same distance can be covered in 4 hours by plane.

The first train from Moscow was met with an orchestra, actors, Russian-speaking community and a crowd of onlookers. While officials made speeches about peace, friendship and the Year of Russia in France, the ordinary people were storming the train cars and posing from the windows. The next day, a local newspaper wrote that the Russians, in contrast to the Europeans, travel in a horizontal position and slowly, with a bar and dining cars. And the express train to Nice is difficult to call an express - it moves at the speed of 70 km per hour.

The Italian media has responded to the return of the train route as follows: "In the country where a limited number of the privileged still feel a strong charm of the words "luxury," "exclusive" and above all, "western," the idea of a slow, but grand trip to Cote d'Azur has become a trendy discovery that promises the flow of passengers and revenue, especially at the beginning of winter."

Meanwhile, of the 150 seats in the first train only 100 were occupied. Luxury seats were sold out almost immediately. Passengers were told that the train is best suited for those who want to see Europe. Some philosophically remarked that in this life you need to try everything.

Railroad workers, in turn, explained that in the long term the train will reach speeds of up to 200 km / h, the technical limit. The schedule will be more convenient in the future as well. Railways officials have no doubts that the express will find its passengers. In summer the passengers will mostly be groups traveling to Monaco and Nice, in winter - skiers traveling to Austria's Innsbruck. Fans of shopping in Italy are expected to ride all year round. Besides, the train can take more luggage than an aircraft - the limit of free luggage is 35 kg (77lbs).

The price of the matter

There are 12 cars in the train. Three of them are luxury (1,050 Euros one way), with one common bar. All compartments have a TV and a personal shower and a toilet behind a secret door. In first-class carriage (459 Euros) there are double compartments, however, there is one shower for the entire car, toilets are also shared. The most affordable is the car of the second class (306 Euros). There is also a shared shower; a compartment can accommodate three passengers.

Those traveling with a family or a group of 6 people can expect a discount of 20-30%. Similar discounts are provided to passengers under 26 or over 60 years old. Breakfast in the dining car would cost 8 - 10 Euros, main course - from 14 Euros.