Far beyond the drug trade 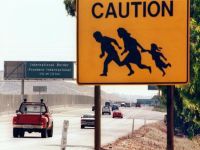 The massacre that killed 72 immigrants in Tamaulipas in northern Mexico at the end of August, drew the attention of the world to a frightening reality. A generalized violence lurks for immigrants trying to cross the country towards the golden dream of reaching the United States. From federal authorities to local officials, organized crime to ordinary citizens, everyone wants to take some kind of advantage of the fragility of these people, who travel without documents and without legal protection.

The violence begins in the south, as soon as you cross the border at places like the Suchiate River, whose crossing by ferry costs $2 and no one asks you for documents - even the Mexican authorities who monitor the place from a nearby bridge. Nearby, in Tapachula, in Chiapas state on the border with Guatemala, is a House of Migrants that integrates a network maintained by the Scalabrini Catholic congregation. Gathered in the street outside the hostel are dozens of Hondurans and Salvadorans, mostly waiting for the moment to move on.

Cigarettes, soft drinks, food and stories, especially many stories circulate among the guests. The explanation for being there never changes. "I'm here because I want to go to America," is the answer that everyone has at his fingertips. At the wheel is Francisco, who comes from Honduras. He was mugged on the way and now walks "getting any means to continue the trip." The assailants, he explains, were dressed in civilian clothes and they took absolutely every property when he was on the train: "They had machetes. We took the train and they took everything. Those who resisted were beaten." The Honduran had to return to Tapachula, but already plans to resume the trip "to resolve the immigration problem."

Case of a police officer

The Salvadoran Ernesto is also there. "They just rob you when you leave your country. Right on the border with Guatemala, a police officer already asked him for money. Then there are the thieves that take the money for the passage that took so long to join," he says. He has been working in the U.S. as a domestic servant in Minnesota, a state in the north of the country. "They 'migrate' you on the company you work for. I've had three times that they took me and I had to go back to my country," he says. 'Migrate' is the nickname that immigrants give to police immigration. The last time was El Salvador. Ernesto left eight months ago. He managed to reach the northern border of Mexico: "Then I was caught by Mexican migration, they arrested me. My family says I'm crazy, but I have to keep trying."

Albert, also from Honduras, joined two other compatriots to ease their journey: "You have to walk from one village to another, getting some work, and follow the mountains to avoid checkpoints. It's a long way. Nobody gives you free passage, you have to have to pay for the vans. Sometimes it's the same driver who assaulted you or betrayed you to immigration. You can even try to pass as Mexican, but by the time they ask for documents, there it was already."

The Honduran Adolfo, 30, has just come to town. One day before his arrival, he was assaulted, exactly at the crossing between Guatemala and Mexico: "They raided the ferry. They took everything I had." It is not his first trip, he says. In 1997, he saw a burglar trying to grab the sister of a young woman who was traveling next to him. The girl resisted and the man fired the shotgun he carried. She died instantly. The brother responded and was killed too. "That was just before Arriaga, here in Chiapas." The face of the narrator is sad for a moment. "Let no one look back, we were told. No one turned, and the 11 rushed ahead, because the train was about to leave for the north."

Luis, from El Salvador, remembers the first time he walked over to Mexico. "I knew nothing, and the guy who led me into a raft made of chambers of inner tires threatened me. 'You see that guy on the other side? If you do not pay me so much, I hand you over to him.' " On the northern border, he continues recalling, it is even worse. Once, he tried to cross into Nuevo Laredo, but he remembers, the thing here is complicated because it is a region dominated by the Zetas, the notorious Mexican drug cartel suspected of the massacre in August. "They bought everything there at the border. Or rather, took possession of everything, they have booths and charge up to 2,000 pesos [$155] for the passage. " Roger Mitchell said: "A 'migrates' Mexican here is a little sluggish. The good thing is not asking for too much money. The municipal police, yes, they ask too much. When they stopped me, the other time, they beat me so I would give money. Then they arrested me for two hours. "

Luis, 32, is a fisherman. He left El Salvador for the lack of opportunities: "I could not keep my company, because priority is given to foreign multinationals. Do you believe that El Salvador improved as the dollar was introduced there [in 2001]? That was no future for us, it was the future for the United States. The cost of the basic food basket increased and wages have remained the same."

U.S. policy is a matter that immigrants like Luis watch with interest. For him, with Obama, nothing has improved: "If everything was open, as NAFTA [the abbreviation for the North American Free Trade Agreement, which is comprised of the U.S., Mexico and Canada], we could come and go, no problem. Not so. I think the United States paid Mexico a certain sum of money for each migrant they hold. If they go through with immigration reform [the promise of the Obama campaign] it would be for the benefit of those who are already there, not for us who are still on this side."

Juan, 23, of Honduras, is already found much further north in Lechería, at a train station in the municipality of Cuautitlán Izcalli, metropolitan area of Mexico City which is a famous meeting point for immigrants and coyotes, which provides the first contract to be brought to the U.S., but that does not offer any guarantee of a successful trip. There, the spirit of immigrants is higher because, when they get to that point, they are already thought to have succeeded most of which was a hazardous journey, clinging to freight trains.

"In Honduras, I am a farmer, but have no land there, we have to rent. I left with a brother to work in Chiapas, but we do not get work and we ran out of money. Hence, we decided to try our luck further north," he says. Juan left his country16 days ago, and then took the train in Chiapas, at Mexico's southern border. "From there, you begin to hear stories of robberies. In Mexico, everyone robs you