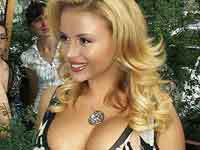 On July 26th, homeless individuals found the body of a man with an axe in his back in one of desolate buildings in the city of Omsk, Siberia. The man was still breathing. He died a day later in a hospital. The only words that he managed to say were: "Anna Semenovich is a prostitute."

The words helped the police find the murderer quickly. He was identified as Aleksey Bozhenov, the leader of a local fan club of the popular Russian singer and actress. Bozhenov was known as a very aggressive fan, who would attack anyone for rude and negative remarks about his idol. However, no one expected that he would be ready to kill for the pop star.

Anna Semenovich is a well-known Russian pop star. She is a former professional skater and a former member of a popular girl band Blestyashiye (The Glittering). Semenovich left the group and started not a very successful solo career. She also appeared in a Russian comedy flick "Hitler Kaput" and in ice cream commercials. However, Semenovich is known in Russia for her unusually large breasts, rather than for her singing. She continuously claims that her breasts are natural.

Bozhenov would attack anyone who did not see anything else about Semenovich, but her bosom. When being arrested, he pleaded guilty to the murder and added that he was madly in love with Semenovich and would never let anyone insult her.

The mad fan also said that he was not sorry at all for what he had done. He killed his friend, Veniamin Pozdnyakov, a businessman, for his rude remarks about the singer. Veniamin was also a member of Anna's fan club in Omsk, but suddenly changed his attitude to the singer. One day, the businessman told Bozhenov: "Madonna is better, and Semenovich is just a cheap prostitute."

The remarks drove the die-hard fan mad. Aleksey Bozhenov enticed Veniamin into a desolate building under the pretext of having a drink there alone. When Pozdyakov turned away from Aleksey, the latter hit him in the right temple with a wooden bar. Pozdnyakov collapsed, Bozhenov pulled out an axe and stabbed the man in the back.

"Two years ago, Aleksey Bozhenov committed illegal actions because of discords connected with Anna Semenovich. Forensic experts concluded that Bozhenov was suffering from a mental disorder which they described as fits of uncontrollable anger. He was provided adequate treatment in a local mental institution, where he recovered in a year, as medics stated," a police officer said.

14:00
Putin to deliver 'lengthy speech' at special ceremony in the Kremlin on September 30
15:06
New Russian territories to require new Russian Constitution
18:52
US helicopters fly above the sites of Nord Stream accidents
16:54
Referenda in Luhansk, Donetsk, Kherson and Zaporizhzhia regions completed
16:37
Anti-terrorist operation will give the upper hand to the Russian Army
15:03
Kremlin: Russia still ready for talks with Ukraine, but conditions have changed
13:30
Russian and Chinese warships spotted off the coast of Alaska
12:57
Global Times: The Fed causes world to experience 'economic earthquake'
12:33
Scale of destruction at Nord Stream estimated as unprecedented
19:40
Turkey's decision on referenda will not ruin Ankara's ties with Moscow
Europe
What will happen to the world after Nord Stream accidents?

Russia
Putin to deliver 'lengthy speech' at special ceremony in the Kremlin on September 30
21:08
What will happen to the world after Nord Stream accidents?
17:51
Humanity will eat itself through violence, war, hatred and neglect
15:49
Senator Valentina Matviyenko: Let the whole world wait till October 4
15:06
New Russian territories to require new Russian Constitution
14:36
Russia pays attention to Poland's 'Thank you, USA' remark after Nord Stream accidents
14:22
US Embassy in Moscow urges Americans to leave Russia immediately
20:41
USA benefits most from impossible coincidences of Nord Stream accidents
18:52
US helicopters fly above the sites of Nord Stream accidents
16:54
Referenda in Luhansk, Donetsk, Kherson and Zaporizhzhia regions completed
16:37
Anti-terrorist operation will give the upper hand to the Russian Army
РусскийDeutschFrançaisPortuguese