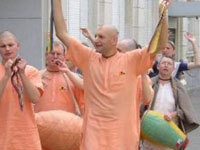 In Omsk, the leader of the Hare Krishna sect where people are deprived of money, housing, and driven to suicide, has been acquitted.

Two years ago, the police department of the Central District of Omsk received a statement from the 25-year-old Svetlana Ahmentzhaeva. The young woman accused Babaji Ali, the leader of the sect of Hare Krishna, of the extortion of money, an apartment and the threat of murder. In the five years it was the 52nd statement from citizens demanding the sectarian should be held accountable. It was the seventh incident where the prosecutor's office opened a criminal case. As a result, the extortionist is still free, and people affected by him are forced to live in fear or hide.

While searching the apartment of Babaji Ali, who is the same person as a repeatedly convicted Ashot Gevorgovich Tugopaev, detectives found drugs. Criminological examination revealed they were Salvia divinorum. In Russia this psychotropic drug is not prohibited by law. With the help of this drug, Hare Krishna easily doped their victims, including Svetlana Ahmetzhaeva.

"I'm afraid even to appear in Omsk. How did you find me?!" asked Ahmetzhaeva.

Still, she agreed to tell how she got involved with the cult:

"In early 2008, my husband had left me. When I met a man on the street who invited me to visit Hare Krishnas, I did not want to live. I did not care where to go. Initially, all showed interest in me, I began to revive. The leader of the sect Babaji Ali tried to comfort me, asked me about my husband, and expressed interest in my living conditions. Knowing that I live alone and own the apartment, he began to invite me to religious services more often. He even made me his student with the right to attend secret meetings for the initiated. I was very happy.

Svetlana was horrified to see what was happening during these services:

For spiritual enlightenment, I was offered to smoke hashish, and then asked to sign the deed to my apartment. I instantly realized that I was dealing with scammers." Under a false pretext Svetlana left the meeting and did not return.

"I started receiving calls with threats and demands to issue a deed to the apartment, "said Ahmetzhaeva. "They would say that the spiritual teacher Babaji Ali needs funds to continue his religious activities, and each adept must give away their property. I went to the police with a statement. The threats have stopped, but only until the completion of the trial of the leader of the sect. When Babaji Ali was acquitted, telephone threats with money demands have resumed. I could not endure this pressure and went to Mongolia to live with my relatives.

Ahmetzhaeva was lucky: her claim made the prosecutor's office to open a criminal case. But Nina Voropaeva, whose daughter cut her veins after joining the sect, could not achieve the same result.

"In 2007, my 16-year-old daughter Natasha joined the Hare Krishna sect in Omsk," says Voropayeva. "My husband and I could not dissuade her. She had been reading religious literature and was convinced that Krishna will punish anyone who does not comprehend his teachings. When she began to ask us for money for Babaji Ali, my husband and I refused her. But the daughter has threatened that if we do not give her five thousand, she would cut her veins open. I had to give the money.

But from that day the sectarians in overalls began visiting us. They said they wanted to cleanse our apartment from the negative energy and expel evil spirits. After their visits all gold jewelry disappeared. I forbade my daughter to go to the sect. And again she said she would cut her veins, if we declared the theft to the police. We did not want to risk.

Everything was well for about a week. But one day, Natasha returned home late at night intoxicated, singing some Hare Krishna song. In the morning the daughter told us, weeping, that the sect leader had told her to bring him twenty thousand, because this was the will of Krishna.

My husband and I went to the school psychologist, but it turned out that Natasha has not been going to school for a month. We decided to buy our daughter a ticket to a resort, and give her no money. Two days later I came home from work and found Natasha dead in a bloody tub. I spent about a month in the police department, demanding that they open a case against the leader of the sect, but prosecutors refused, as leader of the Hare Krishna sect said he had never seen our daughter. "

Sergei Krivonos, an investigator of Internal Affairs of TSAO Omsk:

"During the trial involving Tugopaev Ashot Gevorgovich a dozen witnesses - former members of the Hare Krishna sect - testified on the use of hashish. But as hashish has not been found during the search, the lawyer of Tugopaev managed to convince the court that because of their inexperience the witnesses could not distinguish between illicit drugs and legitimate psychotropic drugs, such as Salvia. And all the charges for illegal sale of drugs were withdrawn.

Father Andrei, rector of the Cathedral of Kazan in Omsk:

"Hare Krishna movement is clearly a pagan movement. Krishna in Sanskrit means "black," "dark". In Indian mythology, Krishna is a negative figure. For Buddhists he is the head of the black demons, enemies of the Buddha. For historians of religion there is no doubt that Hare Krishnas use satanic black mass. And I have no doubt that their activities are directly linked to criminality."