Does Russia have to take human rights lessons from anyone at all? 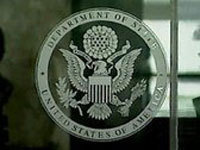 Some representatives of Russian human rights organizations met with Deputy Secretary of State of the U.S. William Burns, and advisor to U.S. President Michael McFaul. The topic of conversation was the discussion on the status of human rights in Russia.

According to one of the participants of the meeting, head of the Center "Memorial" Oleg Orlov, they talked about "the freedom of assembly in Russia and the administrative arrest of human rights activist Lev Ponomarev." The Americans, as evidenced by the head of Moscow Helsinki Group Lyudmila Alekseeva, were "shocked" by the dispersal of the unsanctioned opposition rallies. They promised to give priority attention to the topic of human rights in the dialogue with Russia, which deserved the praise of the human rights activist: "There is no country where all is well in the area of human rights. But comparing the situation of human rights in the U.S. and Russia, with all the overlays, is the same as comparing a nice summer day with the dank fall. Our situation with human rights is immeasurably worse. We have a lot to learn from America," she said.

The topic of bad situation with human rights in Russia is the favorite in the rhetoric of Russian human rights activists and their counterparts from the U.S. State Department and other governmental or quasi-governmental structures of America. The annual reports on human rights in the world, produced or controlled by the U.S. State Department, traditionally name Russia as the most criticized country, in line with the most underdeveloped African countries. However, such clearly biased reporting does not allow considering the published reports as anything other than propaganda material, which is readily used by the Russian opposition, appealing to the high status of organizations producing there reports.

The Russian Ministry of Foreign Affairs has repeatedly spoken with the official statements in respect of such reports, noting their bias. For example, commenting on the report of the U.S. State Department on promoting democracy around the world, the Russian Foreign Ministry sarcastically remarked: "... the report is a formal report on the expenditure of the U.S. Foreign Service budget. The desire of the American diplomacy to show that their salaries are paid for a reason is understandable. But at the same time, the question arises: if, according to the State Department, there are no significant advances in the "problem" countries from year to year despite the growing financial infusion, why do these efforts fail to yield the desired result for the U.S.? "And the conclusion:"We think that the contents of the report only confirm the fallacy of the principle "those who are not with the U.S. are not a democracy," which is the criteria for evaluating the situation in different countries."

But while the train of thought of American foreign policy makers who promote (and sometimes impose) their own standards of democracy is explainable, continuing references of the Russian human rights activists of the U.S. as a benchmark are surprising. Even more so when the "standard" has its own dark sides, which officials prefer not to mention.

This summer the United States for the first time (!) published a report on human rights inside the country. Despite assurances from the authors of the document stating that the U.S. has issues in this area, it is not easy to find the most problematic areas in the text of the report. They are not too visible among the statements that the U.S. is unconditionally committed to protecting them and description of the achievements in this area. They include the abolition of slavery in 1865, granting voting rights to women in the early 20th century, as well as many other less well known outside of the country decisions. This approach could be acceptable provided that if evaluating other countries, Americans also took into account their past achievements in the field of human rights and freedoms, such as the abolition of serfdom in Russia.

Pseudo-self-castigation was noticed by experts and journalists. According to the human rights movement US Human Rights Network, the presented document does not recognize regular human rights violations in the U.S., and the proposed measures are insufficient to fully and expeditiously resolve the existing problems. The Wall Street Journal editorial draws attention to the fact that there is at least one country where human rights situation deserves meticulous attention of the U.S. administration - the United States itself. Assessing fairly diluted State Department report on human rights situation in the U.S., the publication noted that for many years, the idea of human rights has been systematically discredited by people unable to distinguish the rights from their own personal political hang-ups.

It is worth mentioning the report of the Information Office of the State Council of China on the situation of human rights in the United States, distributed a couple of years ago. The report provides statistics not very pleasant for the "standard of democracy". For example, the U.S. ranks first in the world in the number of prisoners per capita. It also mentions law enforcement and judiciary workers who abused their power and significantly violated the freedom and rights of citizens. Despite the recorded 25% increase in the number of cases where U.S. law enforcement authorities allegedly violated victims' civil rights over the seven-year period, in most cases, law enforcement officials accused of brutality have not been brought to justice.

With regard to the rights on holding Russian non-system opposition rallies and appeal to the 31st article of the Constitution, drawing parallels with the United States is also not in favor of the opposition.

The First Amendment to the American Constitution states "the right of the people peaceably to assemble and to petition the Government for a redress of grievances." This right is formally restricted only by a ban on incitement of national, religious, and ethnic strife, and if they threaten the lives and safety of other citizens. But at the same time, the procedure of organization and holding of such public events is governed by the laws of the state where they are to be held. And here all sorts of nuances come into force.

And if we talk about the police, who, according to the opposition, act with "excessive rigidity," the opposition can hold an unsanctioned rally in the U.S. or in Europe and see what happens. A quick look at history destroys the notion of exclusivity of the Russian opposition.

In 2005, police broke up the unsanctioned rally near one of the enlistment offices of the U.S. Army with the use of special equipment: one of the protesting women was hit by electroshock, another bit a police dog, and others simply tear-gassed. Police do not consider themselves guilty, explaining that their actions were entirely justified, because "the demonstrators refused to disband." However, as noted in news reports, this is not the first time when an anti-war demonstration in the U.S. was dispersed, where the authorities explained their actions by the fact that the meetings are held without proper authorization, and hinder the traffic.

Participants of the "March of Dissent" in Russia like to lament about their unenviable fate, but as a punishment for organizing or participating in unauthorized actions they either pay insignificant penalty (from 500 to 1,500 rubles ($17-50) or get a few days of administrative arrest. The only exception so far is Mokhnatkin, who participated in the rally of the opposition on Triumph Square on December 31, 2009, and was sentenced to 2.5 years in jail. However, he was charged for the crime envisaged by paragraph 2 of Article 318 ("Use of violence against a representative of authority") of the Criminal Code for breaking a policeman's nose.

In Europe, the responsibility for such rallies is much more significant. In France, for example, it is punished by imprisonment for up to three years or a fine of up to 45 thousand Euros. A solicitation for the rally (something the Russian opposition and human rights activists like doing when they urge people to come out for an unauthorized rally) by shouting or speeches delivered in public, as well as the proliferation of various kinds of printed or audio-visual products is punished by imprisonment for up to 1 year or a fine of up to 15,000 Euros. In this case, if the appeals resulted in the desired result, the crime is punishable by imprisonment for a term not exceeding 7 years and fine of up to 100,000 Euros. Let us use the experience of European countries and toughen penalties for such actions, proposed head of the Moscow police department Vladimir Kolokoltsev.

Of course, Russia has a lot to learn from the U.S. and other countries. This process is completely natural and necessary. But domestic opposition and human rights activists could benefit from learning how to organize rallies within the framework defined by applicable law. Meanwhile, liberals learn only from Western Left (anarchists, anti-globalization, etc.), who knowingly enter into violent confrontation with law enforcement authorities. But authorities everywhere in the world react to such rallies the same way. And Russia is no exception.