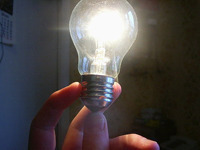 It turns out that the propensity to purchase essential goods "as a reserve" is not common only for the residents of the former USSR. Western Europe, spoiled by a surplus, is now also faced with this phenomenon. Instead of Russian buckwheat, traditional salt, matches and toilet paper, the local citizens are sweeping filament bulbs off the shelves.

In the EU, filament bulbs are rapidly disappearing from the shelves of supermarkets and specialty stores. The residents are buying this product in bulk so they have enough of the supply to last for dozens of years. This is how the local population reacted to the decision of the EU energy ministers to switch to more ecologically-friendly and less expensive light sources - energy saving lamps.

Starting today, a comprehensive ban on sale to the consumer of 75 watts filament lamps comes into force in the EU. Europe intends to completely get rid of old bulbs by 2012. The predecessors of energy saving light sources have been already removed from the production, and stores are allowed to sell the remaining stocks.

European residents were warned about the upcoming changes, and asked to show understanding and support of the initiative of far-sighted officials. However, neither stiff British nor uptight German burghers took liking of the new energy-saving lamps. Europeans began to do the same thing that once the citizens of the Soviet Union have done - they rushed to the stores. They started buying regular bulbs with the speed of light. Salespeople were shocked. And rightly so, as prosperous and well-fed Europe has probably not seen anything like this since the devastation after World War II, when shoppers stocked up on essential commodities.

As for Russia, the elimination of regular light bulbs is scheduled for 2014. Foreign tourists will have an opportunity to combine business with pleasure.

However, it is not that difficult for the residents of former Soviet republics to understand the poor people in Western Europe. Food stamps, poor assortment and scarcity are still alive in the Russian memory.

Many Russians have first-hand knowledge of how to queue in front of stores at 5:00 am. Sprats, mayonnaise, tangerines, chocolate and sausage were considered delicacies. The most useful acquaintances were those who worked as a manager or at least a sales person in a grocery store.

Moreover, sometimes a deficit would suddenly arise, it would seem, for very basic commodities. Periodically, aggravated rumors of an "upcoming war" forced people to buy cereals, sugar, salt and matches. And how can we forget the happy fellows hurrying home with a necklace of toilet paper on their necks!
These are the memories of those times shared by a blogger nicknamed bormental_r:

"And I must say that in Sverdlovsk there was no meat in the stores, period, not only in the late 70's. There was some kind of miracle bone thing called the "soup set," and getting it was considered an extraordinary success, but you could never get a whole piece of meat - never. My sister used to bring it from her business trips to Moscow. By plane. Over 2,000 miles. Very convenient. Milk - there used to be this time! - was given to pregnant women and children under 8 years, with coupons. And you had to get in line at five in the morning, because the store opened at 8, and they would have very little milk, so they could run out any second, despite the coupon ... The same was with chicken. They were blue, wrinkled, with remnants of feathers, with unprotected crests on parchment-covered scalp, with sad eyes closed forever."

Perhaps, the residents of other regions have different memories. For example, in Moscow, Leningrad and the capitals of Union Republics there was never a lack of products. People from all over the Soviet Union would come to the large cities by the so-called "sausage trains" to satisfy their culinary needs.

Household items, such as plastic bags and women's tights, require a separate discussion. After all, it was the residents of the USSR who invented such process as washing disposable bags, and embroidering torn stockings with beads.

Without doubt, deficit made the Soviet people extremely ingenious - they could easily make a cabinet from a broken refrigerator, or a convenient container for storing stuff from a broken washing machine.

As for the bulbs ... The Russians who lived in the Soviet times would not throw away even the burned bulbs. This is because they came up with an invention the residents of Western Europe would never come up with. Caring housewives used to darn their husbands' socks pulling them on the light bulbs.