Our Generation Has Failed

For those of us in positions of symbolic or actual control, those of us in our fifties and sixties, the truth dawns upon us that we have collectively failed to take advantage of what we inherited, namely a welfare system which provided public services, and that what we leave to our children is a shambles, a deteriorating downward spiral of abject misery for your average twenty-one-year-old with no job prospects, no chance of buying a house, no future and no life. We created the generation of 500 dollars. 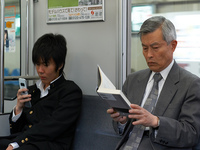 Our Generation Has Failed

I use the expression “500 dollars” trying to cover all continents, aware of the fact that while this would be regarded as a fortune in some developing countries, it is a pittance in the USA and the more developed EU countries, yet it is a growing reality everywhere as the house of cards of the monetarist capitalist market-based virtual economic Paradise comes crashing down round our ears, taking with it those public services we grew up with and came to rely upon.

Along with this utter Nirvana fuelled by Milton Friedman, Margaret Thatcher et alia, if not aliens, came management clichés such as outsourcing, downsizing, investment through layoff, privatisation. The bottom line they spell out is misery.

The Socialist system created in and exported by the Soviet Union from the 1920s to the 1990s saw generations of Africans, Latin Americans, Europeans and Asians enjoy excellent public services, free and universal education of a high quality, cutting-edge technology, industrial development, social mobility, the right to a job and full employment, the right to a house and public utilities for free or for a nominal fixed charge, public transportation, indexed pensions, low prices, subsidised energy costs, cultural activities, access to sports amenities and the sharing of resources among the recipients of the internationalised experiment.

Angolans enjoyed educational standards equal or superior to their Portuguese counterparts, Nigerians had dental care coverage, Cuba set up its excellent healthcare and education systems, while Fidel Castro survived almost 700 assassination attempts by the CIA and friends, students from around the world studied in Moscow, for free.

Even on the other side of the Iron Curtain, where people were saying this system was so bad, there was a reasonable welfare state providing public services: universal education, free; universal healthcare, free, including dental care; decent social subsidies; municipal housing.

Then came one fine day in the 1980s when a collective wave of lunacy swept across the planet from West to East, countering each and every cultural flow which had preceded, traveling in the opposite direction. This wave was the first ripple of what was to develop into the European Union, that anti-democratic multi-national clique of Eurocrats which serves to create jobs for the boys and destroy the lives of the citizens of country after country after country. Brussels now decides whether you get your pension, Brussels ultimately dictates how much your Government will spend on healthcare.

True, the Socialist model was wide open after decades of a constant media barrage, assassination attempts, subversion, piracy, terrorism and trillions of dollars spent by a capitalist model controlled by cliques of invisibles behind the scenes, for whom the Socialist model was a threat. Suppose for example, universal energy resources became available for free?

How much does an American household spend on energy today? How much did a Soviet household spend back then? Do the math and there’s your answer. Then guess who loses out. Analyse access to healthcare in the USA today and compare it with Cuba’s system. And make your analysis. Ditto education.

The Socialist system also had not introduced such stringent quality control measures as capitalist production units had done, it had not introduced vectors which rewarded human endeavour on a scale wide enough to create a collective will towards creating personal mobility, since the State had garnered the niche of collective social mobility. It was enough for many to sit back and receive, which catered for basic personal needs, such as housing, food, and the items mentioned above.

Now comes the question: what has our generation done? On both sides of the Iron Curtain, we inherited welfare systems which grew out of the ashes of the Great Patriotic War/Second World War. We enjoyed them. We had our teeth treated for free, we were given education grants to study, we received unemployment benefit when we were out of work.

And what do we hand over to our children? A world in which if you want healthcare you have to pay for it, in which the State education system has collapsed, vomiting generations of quasi-literate simpletons onto the job market every year, in which a growing percentage of people die because of infections originating from rotting teeth; in which University education has become a business and finally, in which youth unemployment is endemic in almost all western societies.

The wonderful monetarist experiment has seen outsourcing, downsizing, investment through layoff and privatisation destroy our public services, replacing them with less and less in return.

While we grew up on streets where one could walk freely at any time of day and night, our mothersnow dare not venture out for fear of being kicked to death by marauding groups of drunken and drugged thugs.

Then how can we say that our generation has done anything other than failed? The reasons and the solutions are the subject of other articles. For now, what we can do is reflect and try to pass on to the generations that follow, the common sense which we inherited.

And if anyone starts saying “Yes but how do you pay for it?” tell them “OK let’s play a game and pretend it’s a bank” and suddenly trillions will become available.