Panic over a mysterious creature, which attacks humans and animals, has reached Ukraine’s Kiev. It goes about the so-called Chupacabra, which has been recently spotted in Ukraine’s Lvov, Cherkassk and Kiev regions. 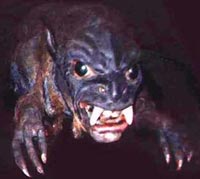 “It ate almost all of my neighbor’s rabbits, and even killed a cat of another neighbor,” a woman named only as Nina, a resident of a village near Kiev said.

Eye-witnesses said that the creature looked like a big dog with huge fiery eyes. The bizarre animal diffused unbearable stench. Village residents also said that the animal was hunting only at night time.

“We stay on duty at night near our rabbits and chickens to protect them. The men decided to kill the creature, but they have not seen it so far,” the woman said.

Chupacabra is no longer a demonic monster of Latin America only. The creature appeared in Russia and Ukraine several years ago. It was terrorizing Western Ukraine in 2009. Local residents would often come across dead bodies of rabbits and chickens. People said that it often attacked pigs and left traces of strong jaws on wooden fences.

When hunting on domestic animals, the creature would penetrate into rabbit and chicken houses, strangle the animals and suck their blood out. It killed nearly 100 rabbits in Ukraine’s Zakarpatskaya region. Local farmers believe that it was a Chupacabra.

The mysterious monster appeared in Russia too. The blood-sucking creature appeared in the Orenburg region of Russia in 2006. Farmers lost dozens of turkeys, sheep and goats. They originally believed that the animals had been killed by bobcats or wolves, but these predators eat prey’s meat, whereas the creature only drank animals’ blood. No one has been able to explain the bizarre deaths of domestic animals.

The Chupacabra, which literally translates from Spanish as ‘goat sucker’, is a phenomenon that appeared in 1995 in the mountains of Puerto Rico. The name comes from the animal's reported habit of attacking and drinking the blood of livestock, especially goats. Physical descriptions of the creature vary. Eyewitness sightings have been claimed as early as 1990 in Puerto Rico, and have since been reported as far north as Maine, and as far south as Chile. It is supposedly a heavy creature, the size of a small bear, with a row of spines reaching from the neck to the base of the tail. Biologists and wildlife management officials view the chupacabras as a contemporary legend.

A woman, who saw the beast attacking a domestic animal, described the creature as a kangaroo-like monster with furious red eyes. Another eye-witness said that the beast was three or four feet high and had dinosaur-like skin. The animal also had large red eyes, long fangs and spikes on the back of its head and back.