Hypnotized Bank Employees Give Away Millions to Gypsies

An unusual process has recently completed in the Volzhsky city court. Ekaterina S., an employee of Russia's state-run bank Sberbank who gave all cash in the bank to a swindler (20,000 dollars, 38,000 Euros and 550 thousand rubles) last April found herself on the docket. Naturally, the woman was fired long before the trial, but the employer was not satisfied with that. The court met the employer’s requirements and obliged Ekaterina return two and a half million rubles to the bank. 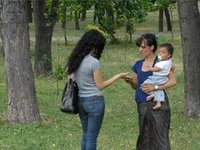 Hypnotized Bank Employees Give Away Millions to Gypsies

Although the lawyer was trying to dismiss the suit on the grounds that the defendant was hypnotized during the crime, the court did not heed his arguments and the results of forensic examination. The decisive argument presented by the employer was the signature of the defendant on the document saying that she takes full responsibility for the entrusted funds.

Ekaterina was not the first and not the last victim of a "professional" gypsy, who tricked people out of their money under the traditional pretence of removing a curse. First time the swindler came to the bank under a plausible pretext - to purchase a large amount of foreign currency.

Russia Today: Gypsy cabs vs. licensed taxis: what to choose?

Apparently, the gypsy looked around and identified her victim. Next day she called the cashier at work. The swindler scared Ekaterina by saying that there was a horrible curse on her entire family, and predictably offered to remove the curse. Despite numerous warnings in the media, there are still dozens of people who believe in such things. Unfortunately, the bank teller was one of them.

Next few days Ekaterina was beside herself with worry, and was running errands for her new “friend”. The gypsy gave the lady a number of tasks. For example, she had to go to a cemetery and find all graves of people who had the same patronymic as her sister and mother. Ekaterina also bought food and water so the "witch" could do her spells. She kept their meetings secret as it was a requirement for removal of the curse.

The concluding chord of magic was a requirement to bring a big sum of money, the bigger the sum, the more likely the positive outcome. The gypsy, who called herself Valentina, explained to Ekaterina that she would be able to transfer the curse from her relatives onto the bills, which would later travel around the world and “dissolve” the curse. Despite the obvious metaphoric approach, the swindler named specific numbers.

As a result, Ekaterina applied for money and received it from the main office next day. Instead of working, the woman took piles of banknotes out of the cash register to put them in a plastic bag. She then handed it over to the "magician" and received it back, as she thought. But when the gypsy disappeared, the bag turned out to be full of neatly packaged photocopies of the banknotes. Only when the teller saw this pile of papers, she got herself together and told her coworkers what had happened.

The police was called up immediately, but "Valentina" managed to escape. In the course of investigation it was revealed that she, along with several accomplices, is suspected of committing other crimes in various regions of Russia. According to the investigators, the gypsy has robbed three dozen financial institutions. She was arrested in early November of last year in Ryazan region. She was caught at work while she was trying to lure money from a hypnotized bank employee, but the colleagues of the victim scared her away.

Galina Korzhova, who introduced herself as Valentina Ivanovna, or Svetlana Lebenkina, toured Russia, removing the "curse" off hypnotizable women. Now she is being detained in the Volzhsky where she committed the largest robbery. "Most likely, criminal proceedings against Korzhova will be combined into one and transferred to Moscow,” the press-service of the police department of the Volgograd region suggested.

Psychologists and law enforcement officials are convinced that, although not everyone is able to resist hypnosis, it is possible to protect oneself from the encroachments of all sorts of "fortune tellers" and "witches.” First, do not get close with strangers, and if you feel any discomfort interacting with a stranger, immediately end the conversation, and leave.

In order to distract and get out of a hypnotist’s control, sometimes it is enough to turn away and look at your watch or touch up your outfit. Criminals involved in hypnosis are not always gypsies, but mostly woman. They can be recognized by their behavior. They choose victims in crowded places, taking advantage of lack of space to come close to a person and take her hand.