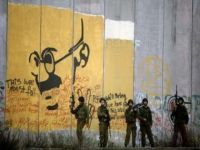 Every Friday, the West Bank Palestinian towns hold demonstrations in front of the wall

To Muslims, Friday is a sacred day, like Sunday for Christians and the Sabbath for Jews. At noon, speakers are placed in each mosque tower to begin to echo a prayer. It calls for the community to go to the mosque not only to pray, but also to where a khutbah will be done, a kind of sermon in which social and political issues related to the community are discussed.

Since the start of construction of the wall by the State of Israel, the religious ritual is followed by a political protest in several West Bank cities where the wall passes. This is the case of Ni'lin, near the city of Ramallah, and several others in the West Bank. Today there are demonstrations, traditionally, in every town through which the wall passes and also in cities where there is Zionist occupation, such as Hebron.

On June 4th, in addition to Palestinian flags, Turkish flags decorated the march in support of the government of Turkey and the occupants of the freedom flotilla fleet attacked by Israel on May 31, when nine activists were killed and dozens wounded and missing, more military action of Israel.

Shortly after the call, dozens of people begin to focus not on the mosque, but in a land more or less 1.5 kilometers from the wall. Still in the city, on the way to the ground, Fuad Khauadja, of the Union of Agricultural Committees, who accompanies the report in Brazil of Fact for a sale in which a young man about 16 years old rose from his chair to greet him with difficulty. With a crutch in his hand, they exchange a few words. "He took a shot in the abdomen and leg at one of the Friday demonstrations, and so has difficulty walking," he says.

Already on the ground, groups of people will be sitting under the olive trees, to protect themselves from the sun, awaiting the call to prayer. Then, arranged in three rows in front of the religious leader and for a little over ten minutes they pray, then they go on a march to a steep terrain, full of rocks, olive trees and debris from tear gas used by Israelis from other Fridays.

Adults with children follow up to a certain part of the walk. Insofar as the group nears the wall, Israeli soldiers begin to throw bombs of tear gas behind the wall. A part of the group withdraws and some, mostly younger people, with slingshots in hand, begin to throw stones to the other side of the wall. Today the wind is in favor of the Palestinians. The gas disperses quickly and takes the gas toward the troops.

One of the symbols of Judaism is the Star of David, the biblical character who defeated Goliath with a sling and a stone. Now, who wields a stone against the giant are the Palestinians. "The march is peaceful. It is always so, but for them 'peaceful' does not exist. When we get near the wall they already are beginning to throw gas. The majority retreats, some young people are prepared to throw stones," explains Taicir Karaja, Brazilian son of Palestinians who ten years ago lived in the nearby city of Saffa.

Sometimes the soldiers, heavily armed, fire on the demonstrators from behind the wall. Fuad Khauadja says that since the start of construction of the wall, 80 Ni'lin people were arrested and five people were killed. One was a 10 year old boy, Ahmed, who played with other children after the demonstration. Witnesses said an Israeli soldier went to the spot where he was and shot the boy with a machine gun at point-blank range in the head. Nothing was done, no punishment was carried out. "Israel is a state that obeys no law, does whatever it wants and is never punished, no matter what it does," Taicir says angrily.

The Palestine Red Crescent, connected to the Red Cross, maintains an ambulance and professionals equipped with stretchers and gas masks to protect the side of the demonstration. Today, fortunately, no injuries.

The construction of the wall began in 2002, still under the government of Ariel Sharon. The objective was to separate the West Bank from the remaining territory. The construction, however, does not respect the borders of the West Bank, known as the Green Line, set in the armistice of 1967. The work also breaches the Oslo Agreement of 1993. Only about 20% of the wall coincides with the Green Line, the remaining 80% is located in the territory of Daffa - or the West Bank. The work is seen as a symbol of the apartheid to which Israel subdues the Palestinians and showing the total disregard and failure of the Zionist state in relation to international resolutions. Although various international organizations have condemned the wall, Israel has not suffered any punishment.