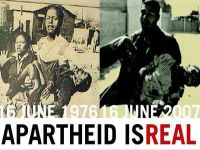 Hundreds of people gathered on Wednesday (16) in the neighborhood of Soweto, Johannesburg, to commemorate the struggle of young South Africans against apartheid, one of the most important holidays of the national calendar, the Day of Youth.

We remember those who risked their lives in fighting the regime, such as Hector Pieterson, a young 12 year old, killed by police while attending a demonstration in protest against the teaching of Afrikaans in schools.

Similar to German, Afrikaans was spoken by white immigrants who colonized South Africa. This training was imposed on the South African population, which led to a series of student protests in the country in the 70s.

Pieterson died during one such protest. On June 16, 1976, he was the first victim of a series of repressive police actions in Soweto. Besides him, about a thousand people died, almost all black.

Photos of Pieterson being carried by a colleague shortly after being shot by police became a symbol of black resistance against apartheid. The boy's death has become a landmark in the history of South Africa and still inspires the country's citizens to claim their rights.

"The death of Pieterson was the beginning of the end of apartheid," said Ahmed Kathrada, one of the activists arrested with Nelson Mandela, during the period of discriminatory rule. "After his death [Pieterson], the South Africans lost their fear to fight for their rights."

Kathrada was one of the South African politicians who have followed events of the Soweto youth in memory of Pieterson. With dances and songs of a political nature, these young people closed the street that runs past the site where Pieterson is buried, now a square in the neighborhood.

The Black Consciousness party chairman of South Africa, Nchaupe Mokoape Aubrey, also attended the celebrations. For him, the memory of Pieterson and the others who died fighting against apartheid should be a lesson for South Africans to combat the problems that currently afflict the country.

"We need to end corruption, the diseases that kill our people, to end crime and improve our standard of education. The memory of the day June 16, 1976 is to inspire our people to fight for the good of all. "