Kumar Paswan, an eight-year-old Indian boy, was born with a terrible abnormality. The baby boy was born with a parasitic twin: the lower part of his twin brother was growing from his stomach. Doctors have recently conducted a unique operation to relive the boy of his intolerable tortures. 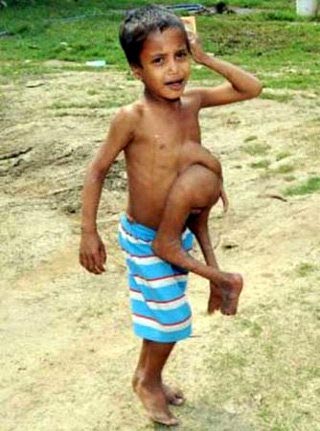 The boy’s twin brother died in the mother’s womb. His body grew into the stomach of the healthy fetus. Obstetricians were shocked to see legs sticking out of the baby’s stomach.

“When he was born medics told us that his life would not last long. But my son looked healthy if you don’t look at his stomach, of course,” the boy’s father said.

The little Indian is still alive despite the medical prognosis. It took his parents a long time to collect the money for surgery. The parasite child has been removed from Kumar’s body. The young patient feels fine – he is looking forward for the moment when he recovers from surgery to finally be able to enjoy life like everyone else.

A similar story took place in Russia’s Siberia, in the city of Irkutsk, in 2003.

A baby-boy was born with another body growing on his stomach. It had little legs, hands, genitals, but no head. There was a healthy child (specialists call it the "host-child") and a "parasite child" growing from the stomach. The parasite child did not have its head, it had no lungs and no heart either, although it had a kidney, the urinary bladder, the urethra and the intestines. The parasite child was living with the host child's help.

Modern medicine knows only twelve incidents, when a baby was born with a parasite child, growing in the stomach. There was an incident, when another baby was growing inside the abdominal cavity. The operation in Irkutsk was the first example of bifurcation in Russia, when the "parasite" was growing on the baby's stomach. The boy was named Nikita.

"If Nikita were absolutely healthy, it would be possible to delay the operation for up to one or three years. It would only be a cosmetic problem. Usually, such operations are performed when a child turns 12 months, because this is the age, when a baby starts walking, and the parasite child may prevent the normal development of the host child. We had to operate Nikita urgently, because he had a congenital heart disorder. The parasite child worsened the blood circulation, and Nikita's heart could not cope with such hard work. It was hard for the boy to feed two bodies. In addition, Nikita will have to have a heart operation at the age of three months. Doctors would not venture to perform an operation with the parasite baby,” a doctor said.

Nikita became his mother's second child, born into her second marriage. Her daughter is a normal, healthy child.