Russian High-Ranking Official Claims He Was Abducted by Aliens

The West was shocked by the statement from a high-ranking Russian politician, which he released on Russian Channel One, the country’s main TV channel. 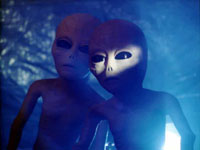 Russian High-Ranking Official Claims He Was Abducted by Aliens

On April 26, 2010, Channel One host Vladimir Pozner asked Kirsan Ilyumzhinov, the President of the Kalmykia Republic, the following question:

“I’ve never met a person who would claim he was on an interplanetary alien aircraft. Has it really happened?“

“Seriously, it has happened,” the Kalmykia leader answered and told his outstanding story about his only encounter with extraterrestrials in his Moscow apartment.

“Was it the only encounter?” Pozner clarified.

“Yes, the only one,” Ilyumzhinov confirmed.

The aliens turned up in his Moscow apartment on Sept 18, 1997. He said as he was falling asleep he heard someone calling from the balcony. When he got up to check, he saw a "semi-transparent half-tube". He said he entered the tube and came across human-like aliens attired in yellow space suits. The Kalmyk leader took a flight with them on their alien spaceship.

It took some days before Pozner’s show with sensational story by Kirsan Ilyumzhinov shocked the civilized society. It happened when LDPR member Andrei Levedev drew attention to it by wrriting to Russian President Dmitry Medvedev expressing his concern that the Kalmyk leader, as a carrier of confidential information, could divulge state secrets to the aliens.

After that, the western media exploded. Hundreds of world newspapers assessed the sensation and acknowledged the uniqueness of the situation. Yet, no one understood why he chose to talk about it. There will be people in Russia who would think it was a bizarre behavior for a leader of a subject of federation.

“Pozner asked me, and I answered,” Ilyumzhinov explained.

Those mingling in ufological circles know that it was not the first time the Kalmyk leader told his story about his encounter with the aliens. They are no longer exuberant because there were no new details reported.
Pozner also knew the story since he asked about it.

Not everyone knows that Ilyumzhinov first openly told the story on July 22, 2002 at radio Svoboda, while no one was making him speak. Speaking about the future of chess, he mentioned Ostap Bender’s dream to conduct an intergalactic chess match. He then said he had no time to go to space and added he’d been there once before. He explained that he travelled with aliens who once took him to space.

“Who took you?” the host clarified.

“Aliens on a spaceship. They came, took me, and I spent 24 hours with them in the space,“ Ilyumzhinov explained. At the moment of the confession he was an acting President of Kalmykia with the next election in a year. He has been the President of FIDE for six years and is not eager to get anywhere else. This means that the surprising and strange confession is not PR, it’s an obsession.

Answering the question about the appearance of the aliens Ilyumzhinov, sensing doubts from the host, said that they looked like humans.

“Were they big, about 6 feet tall? The way they are often described?”

“Not really. Don't treat me like a schizophrenic. I’m just saying that I saw them. Just the way I am talking to you, I saw them just like that.”

Even then, nine years prior to Levedev’s letter to the Russian President, radio Svoboda tried to elicit the details of the contact.

“Did they give you any directions? Did they program you for the future?” they asked, as if trying to find out if he was converted.

“No,” Ilyumzhinov answered. "Nothing … I did not understand anything. Several days after I was thinking “Why did they take me?” And berated myself for not asking questions. But maybe it is not time yet for the extraterrestrial civilizations to meet. I don’t think we need to. We are morally not at the stage yet when we can meet other civilizations, aliens."