Naomi Campbell's 40th Birthday Turns Moscow Up Side Down

Supermodel Naomi Campbell celebrated her 40th birthday on May 25 in Moscow's  Capital City restaurant. Ordinary Muscovites witnessed an unusual sight when the traffic on Presnenskaya embankment was as dense as Tverskaya rush hour traffic. The traffic jam was comprised of Rolls Royce, Hummer and Maybach luxury cars, Life News reports. 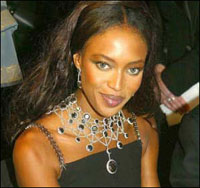 Naomi Campbell's 40th Birthday Turns Moscow Up Side Down

Unfortunately, rubberneckers were unable to see the passengers behind tinted windows. Those who were gathered near the restaurant entrance could see international and Russian celebrities. Famous guests were climbing up the restaurant stairs clasping invitations worth 3 to 6 thousand Euros. This was the price of spending a night in the company of Naomi Campbell, Vladislav Doronin, Jennifer Lopez and Marc Anthony. Live music was presented by Duran Duran. Entry fee for Russian celebrities was smaller – “only” 50,000 rubles (approximately $1,700). They had to wait at the entrance since their invitations stated the time 40 minutes before the ceremony.

Moscow birthday party that was presented as a benefit night cost the supermodel and her fiancée 4 million dollars. The revenue from the guests was 2 million.

The ceremony was assisted by 70 chefs, 130 servers and 150 security professionals. All personnel wore name badges. “We were given a special one-day pass. Security watches our every step. I’ve been working here for 3 years but I’ve never seen security measures like these in the building,” said one of the servers.

Moscow glitterati were stunned with the splendor of the celebration. Miss Campbell personally greeted every guest, including Igor Chapurin, Valentin Yudashkin, Svetlana Bondarchuk, Ksenia Sobchak, Valeria and Joseph Prigozhin and other representatives of Moscow business elite.

The treats were far from ample. The guests were offered Japanese cuisine, fish delicacies and white wine followed by fresh raspberry and fruit cupcakes.

The afterparty was held in Monet restaurant where Doronin invited 150 people. The guests were treated with a runway-shaped cake, Russian vodka and apple hookahs. In the restaurant the millionaire only paid for his own table, and the rest of the guests paid for themselves. “Moscow is a very elegant city,” said Jennifer Lopez when she was living. The actress’s visit was tarnished with a 2-hour delay in Vnukovo airport.