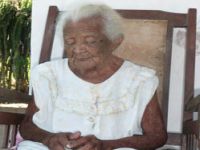 Updating the study of centenarians in Cuba, that took place in the period between 2004-2008, a multicenter study coordinated by the National Aging and Social Welfare Office, Ministry of Public Health, shows that in our country there are currently 1,541 people in ages beyond the hundreds, 53 more than two years ago.

Candelaria, the Oldest Resident of Cuba

The issue will be analysed in the new edition of the International Seminar on Satisfactory Longevity: Integral Vision, which includes a gathering of centenarians, from this Wednesday until Friday at the Hotel Nacional de Cuba with the participation of delegates from ten countries. This study motivates a lot of interest among researchers and the general population consists of a group of people who overcame environmental and health obstacles to achieve the higher limits of life.

A rector in Cuba, one of those who have exceeded the 100 curve, is Juana de la Candelaria Rodriguez, 125 years old on February 28, who lives in the city of Campechuela in the province of Granma.

The president of the 120 Years Club and the Caribbean Medical Association (AMECA), Professor Eugenio Selman-Housein Abdo, in his book "How to Live 120 Years," published by Science and Technology, supports six key elements, as building blocks for the expansion of life.

Motivation, from an early age, because we are what motivates us, the food, fruits and vegetables and eating a little of "everything," avoiding the extremes of health, focusing on prevention, physical activity for 30 minutes 3-5 days a week, because "we need change," culture and spiritual enrichment has a tendency to combat excessive stress, along with healthy surroundings and environment.