Medics Save Man with Elephant's Nose

Medical professionals conducted a unique operation on a patient whose nose was turning into a trunk. 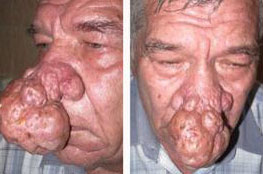 Medics Save Man with Elephant's Nose

Doctors of the Moscow regional scientific clinical institute named after Vladimirsky operated on a man whose nose tissues grew to gigantic size.

The rare disease is called rhinophyma and it has been known for a while, yet it is the first case in the world when the growth reached this size.

A 63-year old resident of a city in Moscow region was admitted to the hospital when the growth on his nose reached his chin.

The man was experiencing certain difficulties eating and breathing, let alone his appearance. The huge tumor was completely covering his mouth, and the man had to eat lifting his tumor with one hand and holding a spoon with the other.

The only way to treat rhinophyma is surgical. During this procedure anesthesiologists encountered an unexpected issue when it was difficult to fix an oxygen mask on his face. The doctors found the way out and everything went smoothly.

“The operation was conducted with the application of cold plasma. This is a relatively new method first used in 2005. Extra tissue is cut off with a special device . The advantage of the method is reduced blood loss, control over all removed tissue, absence of pain and fast healing. The causes of the diseases are not known. Usually it is men who suffer from it, rarely women. It is interesting that Afro-Americans never suffer from it,” the doctor explains.

“Smoking, alcohol, high blood pressure, diabetes may cause the disease. The first symptom is alteration of skin color. If you develop redness, blue color and uneven skin surface on your nose you should consult a doctor. Timely treatment will prevent further growth,” said the doctor.