Cisvestism: Good Perversion for Everyone

For many years sexologists have been saying that role games are the best aids in sex. Yet, some are so interested in trying on other people’s image that they use it not only in bed but in real life as well. The most intriguing thing is that they get incredibly satisfied by it. Rich people dressing like the poor, college professors who put on school uniform, scientists who wear firefighter’s uniform at home – this is a non-exhaustive list of patients treated by a famous LA sex therapist Dr. William Sharp, who has been studying an interesting sexual anomaly known as cisvestism for years. The doctor dedicated most of his life to studying his patients and came to conclusion that all people are perverts to some extent. In his interview with Express Gazeta, the famous sex therapist revealed some of the shocking secrets of his research. 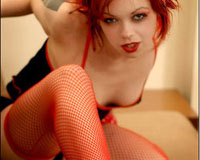 Cisvestism: Good Perversion for Everyone

“Cisvestism is a type of fetishism or transvestism. While transvestites change into clothes of the opposite sex, my patients dress into clothes of their own sex, although of a different social status or profession. For instance, a proper housewife tries an image of a prostitute and spends time in bars, or a 50-year old librarian dresses like an 18-year old girl and goes to a club. I have a client who owns a café. After work, she puts on a waitress uniform and goes out to pick up tipsy truck drivers from a nearby hotel.”

“What’s so special about it? Women always want to look younger, and if you want to pick someone up, a short skirt or waitress uniform is a great idea.”

“It’s one thing when someone does it once in a while. Inability to get satisfaction with no apron on is another. My clients only get excited when they are dressed as someone else. This is the brightest sexual emotion for them. For example, I have a patient who is a chef whose wife does not pay much attention to him. Once he put on his brother’s police uniform and went out. He confessed that at that moment he felt like a manly, strong cop. It is not surprising that dressing as a cop became an erotic ritual for him. Finally, he was so comfortable with his new image that women began paying attention to him. It is too bad that he remained his unconfident, shy self without the uniform. People like this consult a doctor when they realize they have lost their own identity. Plus, it is not easy to explain to your spouse why you cannot have sex without a costume. “

“I wish. Not every husband or wife dreams about sex in costumes. Usually the spouse is not happy about his other half’ inclinations. Even if the spouse also enjoys costumes it may not be always be for the better as you get bored of every game. Today you want to go to bed with a geisha, next day you want a naughty nurse. These people, on the other hand, like their role and will not be pleased with any other. As a result, we get spousal issues. Often it gets even worse when a person starts using this different image every day. For example, when a millionaire gets off from dressing like a bum for business meetings or a housewife gets a Mohawk and buys a biker’s jacket and then goes to her embroidering club. Such people lose jobs and suffer form judgment.”

According to Dr. Sharp, there are many famous people who have this disorder. Their strange costumes and behavior are taken as whims, while in reality they need a sex therapist.

“I have serious suspicions that Bill Gates and Donald Trump suffer have this abnormality,” the doctor said. The former, despite his billions, cannot live without stretched out sweaters and old jeans. Probably, these items bring Gates memories about poor, but sexually active years. Trump looks like a clerk in a second-rate firm because of his terrible hair and baggy suits, also a tribute to his “young” memories.”

“What about singers and actors? Are their clothes just a tribute to their image?”

“It depends . Madonna is a 100% pervert . At age 51 she does not mind wearing her daughter’s clothes and has a lover who is young enough to be her son. She admits that the younger she looks, the sexier she feels. Mariah Carry is 40, and she goes out wearing shorts and short tops revealing her belly, and wears bikini in her video clips. She obviously likes the image of a prostitute . Same is with Lady Gaga, who dresses like a transvestite not only on stage but in real life as well. Johnny Depp is a classic millionaire - bum . His everyday outfit would shock a bum – his tangled beard, stretched out hat, shapeless coat and dirty jeans. There is a rumor he hates deodorants and colognes and does not shower for weeks. He and his wife Vanessa Paradis is a good match. The couple’s friends say that it is impossible to be near them because of a strong body odor. On the other hand, it is a rare case of mutual understanding.”

Finally, Dr. Sharp said that everyone is a pervert one way or the other, because people radically change their image several times in a lifetime. Women especially like to wear age-inappropriate clothes, and even at 50 behave like playful high school students.

“It does not matter what you look like, it matters what you feel like. If your costume excites you more than your other half, the problem is not you, it is you marital bed,” said the therapist.