Man Lives Happy Life with Bullet in Head for 66 Years 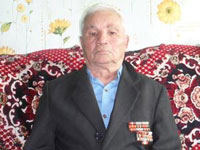 Man Lives Happy Life with Bullet in Head for 66 Years

He goes to get groceries by himself, cleans his house and gets the table ready for guests who come for a visit on his biggest holiday, Victory Day.

On this day he usually remembers his bitter story. Sixty six years ago a fascists’ bullet that nearly took his life got stuck in his head.

Ivan Nikulin was 18 in 1942 when he began fighting in a war as an intelligence officer. The military service ended for him in Warsaw, in September of 1944.

“It was my last, very complicated task. Together with 17 other soldiers I got into the enemy’s headquarters. We killed two German generals and thought we had a successful mission. Suddenly, a third general appeared. To this day I don’t know how I failed to notice him . He raised his hand with a gun and put it next to my temple. It got dark. I was falling into the emptiness; it was cool, quiet and light… At that moment I did not want to come back to the war,” the veteran remembers.

He opened his eyes 20 days later in a Moscow hospital. A nurse told him that his friends brought him back from the German headquarters and then he was delivered from Poland to Moscow on a train.

“The bullet got stuck in the brain. If the shot was made from a greater distance, it would have gone through,” doctors explained.

First they wanted to operate, but closer examination of the X-rays showed it was too dangerous.

It is hard to imagine that a person with a wound like this could survive. The commanders of his division could not believe it either and sent a death note to his family. When he was treated and sent to his hometown his parents cried for a few hours: “Go away, our son is dead!”

Then they acknowledged it was him, and cried for a long time over his bad injuries. He was wounded in the head, and his left arm and leg were partially paralyzed.

Ivan was provided disability benefits and for a while he forgot about his complex injury. A few years ago his wounds reminded of themselves, and his arm and leg stopped functioning. He was recommended to go through a series of tests. Yet, the hospital he came to for help refused him. Doctors looked at his medical history and stated: “People don’t live with wounds like this!” Ivan replied “But I am a human! And I am alive!”

The veteran had to visit doctors for a week to stand up for himself. Finally, his information was sent to Chita Medical Academy, where a doctor allowed him to get tested. The results of his tests revealed that the bullet was indeed stuck in his head. It was a rare case, but people do survive such injuries. Nikulin is still offended thinking about the story.

“ The war got literally stuck in my head . I am used to not paying attention to the throbbing pain. But it’s so painful when now, in peaceful times, I have to prove that I fought in the war and stayed alive despite the bullet in my head.”