There is hardly anyone who did not hear about Grigory Perelman, the reclusive hero from Saint Petersburg. First he solved in the affirmative the famous Poincare conjecture which seemed improvable. Then he shocked the world again by refusing one million dollars of the Millennium Prize Problems he was awarded. The award was established in 2000 by private Clay Mathematics Institute for finding solutions to the seven mathematical problems of their choice. The Poincare conjecture was one of them. 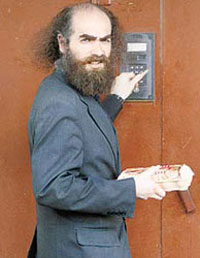 On March 18 it was reported that Perelman won the award. Until now we do not know whether he is going to accept. What happens to the award? Has the genius officially refused it?

We addressed our questions to the president of Clay Mathematics Institute Jim Carlson.

- Mister Perelman is still thinking. He is probably deciding when it would be more convenient for him to accept the award. He has not provided his final answer yet .

- Do you stay in touch with him?

- If he does refuse his prize, what will happen with the money? Is there a special procedure for this?

- How long are you going to wait? Are there any time limits?

- There are no time limits. He may think as long as he needs to.

- I would prefer not to tell.

- Do you still hope that he accepts the award?

- It is his award, he is a laureate. The only thing that is not clear is whether he is going to accept the money.

- Perelman is the first one who took so long to make a decision, correct?

- He is the first one who was awarded. I would like to remind that the stipulation for receiving this award was finding a solution to one of the seven most complex mathematical problems, including the Poincare conjecture, which he did brilliantly. I personally believe that this is the most important thing, not the money. I think Russians should be first of all proud of the achievement of their outstanding compatriot.

- If he chooses to receive the award, where will the ceremony be held, in the US or some other place?

- A scientific conference devoted to the Poincare conjecture and the solution method found by Grigory Perelman will be held in Paris on June 8-9. We invited him to participate and receive his award. Honestly, at the moment I am not confident he will be attending.

David, Perelman’s friend: “Gregory is convinced he has mathematically proved the existence of God."

“We’ve been friends since childhood, he is a deeply spiritual ascetic and a virgin monk,” wrote the Komsomolskaya Pravda reader. “His apartment is heavily decorated with icons. He wears a beard and a large cross. He keeps rosary in his pocket. Even at night he prays. He is super religious, hence all his idiosyncrasies. More than that, he is convinced he has proved the existence of God.”

Poincare suggested the conjecture it in 1904. Now Perelman convinced everyone who understands that the French topologist was right. Perelman’s proof, according to some astrophysicists, helps to understand the shape of the Universe. It allows suggesting that it is three dimensional. But, if the Universe is the only “figure” that can be drawn into one point, then it can probably be stretched out from the point. This would be an indirect proof of a Big Bang theory that suggests that the Universe has developed from one point. This means that materialism wins over the supporters of God’s existence theory.

Yet, half of those involved in arguments on the forum think that the Big Bang theory and God are not mutually exclusive. God could be the one to organize the Big Bang.