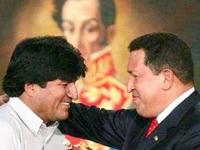 A U.S. scientist is supporting with research a theory of Venezuela's Hugo Chavez. Hugo Chavez has always believed Simon Bolivar might have died from arsenic poisoning. During his last days, Simon Bolivar did not exhibit most of the classic symptoms of his purported cause of death: tuberculosis. By 1830 Simon Bolivar was in ill health, suffering fevers, loss of consciousness, headaches, shortness of breath, weight loss, skin problems and other conditions. The symptoms of tuberculosis include coughing up blood, constant tiredness and fatigue, rapid heartbeat, swelling in the neck (when lymph nodes in the neck are infected), chest pain, loss of appetite, coughing up phlegm.

Dr. Paul Auwaerter, investigated the inconsistencies and presented his case at an annual University of Maryland School of Medicine conference on the death. The Venezuelan embassy sent two representatives to the event, including an official who led a council Chavez convened to examine Bolivar's death. Now, Dr. Auwaerter of Johns Hopkins University School of Medicine says his death was most likely caused by arsenic -- either from drinking contaminated water or using the naturally occurring poison to try to cure headaches and hemorrhoids. Auwaerter said he did not rule out murder, but thought it was unlikely.

The doctor said the Venezuelan government had not yet been in touch with him regarding his work.

"What I said has been taken and used for their own political means," Auwaerter said in a telephone interview.

Dr. John Dove, a retired orthopedic surgeon and Bolivar scholar from Acharacle, Scotland, was also invited to speak at the conference. He said a number of attempts were made on Bolivar's life and the list of suspects included his generals, who were in a power struggle with the leader.

"There were plenty of people who would have liked to have finished him off," Dove said.

Venezuela, the Bolivarian Republic of Venezuela, seems to be the birth place of great liberators, great South American leaders. Currently, South America is fortunate to have Hugo Chavez. Chávez has greatly angered wealthy Venezuelan oligarchs and U.S. imperialists seeking to dominate the South American continent draining South American resources directly back to the U.S. as it has been doing since the young country declared its independence from England.

Hugo Chavez uses his coutry's wealth for the people, oil revenues implement his many social programs. Such programs included literacy campaigns in the poorest regions of the country, new health clinics, new homes with running water and electricity and paved roads in rural areas. The most high-profile programs are the Chavista Missions, outreach programs directed at groups of citizens who had historically been ignored. For example, a public health mission called Barrio Adentro employed over ten thousand doctors dedicated to serving in areas of Venezuela where no doctors were ever available before.

In 1799, following the early deaths of his father Juan Vicente (died 1786) and his mother Concepción (died 1792), he traveled to Mexico, France and Spain, at age sixteen, to complete his education. While in Madrid, he married María Teresa Rodríguez del Toro y Alaiza, who was his only wife, related to the family of the Marqués del Toro of Caracas, in 1802. Eight months after returning to Venezuela with her, she succumbed to yellow fever.

Although he had no formal military training and no battlefield experience, Bolivar was made a Lieutenant Colonel. He participated in his first engagement on July 19, an assault on the Spanish stronghold of Valencia in which he distinguished himself, but the rebel forces were repelled. A siege forced capitulation on August 19th after heavy losses on both sides. It was a harbinger of things to come.

Bolivar wrote his fellow citizens, "I have been chosen by fate to break your chains…Fight and you shall win. For God grants victory to perseverance." He exhorted his men that misfortune was the "school of heroes."

Bolivar wrote his most famous document, Letter from Jamaica, in which he declared, "A people that love freedom will in the end be free." He foresaw a great federation of Hispanic American republics which would deserve the same respect as European nations.

The fight for the independence of Venezuela, Columbia, Ecuador, Peru, Bolivia, and Panama (a department of Colombia) had involved 696 battles, with an average of 1,400 soldiers per engagement, counting both sides together.

Simon Bolivar began vigorously rebuilding and administering the new states. He was at the height of his power when he convened a congress of Latin American republics in Panama in 1826. He distinguished himself among his contemporaries through the use of his prodigious talent, his intelligence and his will, qualities which he placed entirely at the service of a great and noble endeavor: that of liberating and organizing the civil life of many nations which today view him as their founding Father. His mortal remains were brought to Venezuela with great pomp in 1942, he now lies in the National Pantheon in Caracas.

Chavez's government is currently carrying out its own investigation into Bolivar's death. A new state forensics laboratory plans to take on Bolivar's death as its first case. Chavez theorizes that Bolivar was murdered by a Colombian political rival, Francisco de Santander, and some analysts warn that revisiting the case could actually worsen already strained relations between the neighbors since this character can be traced to Colombia's lame duck narco trafficking leader, Uribe.

Today we see the vision and dream of Simon Bolivar coming true with an ever increasing group of progressive leaders coming forward. We have ALBA, the Bolivarian Alliance for the Peoples of Our America (Spanish: Alianza Bolivariana para los Pueblos de Nuestra América)