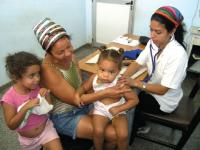 U.S. Scientists Praising Cuban Health and Urge Ending Blockade
U.S. Scientists Praising Cuban Health and Urge Ending Blockade
The United States should put an end to drug trade restrictions imposed against Cuba for 50 years in the context of an economic blockade, according to the scientific magazine Science, which reflects the views of scientists and is considered one of the best publications of its kind in the world. "An even better policy would be the total elimination of the commercial blockade," they argued in an article teachers Paul Drain and Michele Barry, of the School of Medicine, University of Staford.
Both say that the end of the blockade would allow the U.S. to study and learn from the successful universal health care system of Cuba. "In spite of after a half a century of blockade, Cuba has better results in public health that most Latin American nations," they wrote. Its aggregate successes are comparable to those of more developed countries.
In relation to Latin America and the Caribbean, Cuba exhibits the highest rate of life expectancy (78.6 years) and the largest number of physicians per population (59 to each 10,000). It also has the lowest infant mortality rate (5 per thousand births) and among children (seven thousand), according Drain and Barry.
Cuba also has "one of the highest rates of vaccination and births around the world, attended by health experts."  These accomplishments, they estimate, are mainly due to the emphasis that Cuba attaches to primary health care, rather than the magnitude of financial resources available to the national medical system.
Through community education on prevention of diseases and health promotion, Cuba depends less on medical resources to maintain a healthy population. The United States would gain by studying the successful experience of the Island and adopting some of its policies for the sector and this could also be a good first step towards normalization of relations between Cuba and the United States, the teachers conclude in the article published by Science.
Source: Prensa Latina
Translated from the Portuguese version by:
Lisa KARPOVA
PRAVDA.Ru