A few months ago the United Nations published a report about illicit drugs consumption during the year of 2007. The conclusion was that 208 million people - 4,8% of the World’s adult population - had used illicit drugs, at least, once a year. It was also found that the “regulars” - classified as drugs addicts - corresponded to 26 million people or 0,6% of the World’s population. Finally, it was announced that 200 thousand people died during the year of 2007 due to the use of illegal drugs. 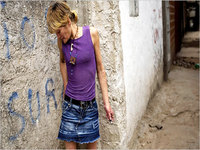 A few months ago the United Nations published a report about illicit drugs consumption during the year of 2007. The conclusion was that 208 million people - 4,8% of the World’s adult population - had used illicit drugs, at least, once a year. It was also found that the “regulars” - classified as drugs addicts - corresponded to 26 million people or 0,6% of the World’s population. Finally, it was announced that 200 thousand people died during the year of 2007 due to the use of illegal drugs.

With this alarming scenario a large National-State-Local “clean up” is demanded. The worldwide authorities are searching for drug dealers, literally seeking for “a needle in a haystack”. Those arrests became a priority in our National Security Policy in Brazil.

A few days ago I read that in our planet, three million people die every year (approximately six per minute) due to cigarette smoking. The World Health Organization foresees that if nothing is done, cigarette addiction will lead more than 10 million people into death annually.

The worse news is that tobacco doesn’t kill only the “addicts” (indeed “addicts” because of the chemical dependence induced by tobacco), but it should take into consideration whoever is near by as well. Those involuntary fatalities are not a few, accordingly to the World Health Organization. Passive smoking is considered the 3rd largest cause of involuntary deaths in the World.

The “smoking issue” is such a big concern that according to a study published by the Newsweek magazine, in the United States alone, smoking shall lead to 420 thousand deaths per year, 50 times the number of deaths caused by illicit drugs' consumption.

Facing these numbers, it is hard to understand the World’s Policy to overcome drug use. Meanwhile, the tobacco industry keeps steady if not growing, supplies its 1,1 billion clients and maintains its US$ 285 billion annual profit. Brazil alone supplies this industry with a US$ 4,5 billion in revenue and an immense number of “smokers” that reaches approximately 35 million people.

There are about 60 types of diseases related or caused by alcohol consumption. It is known that at least 2.3 million people die from problems connected with alcohol intoxication per year, which sums up to 3.7% of World’s death toll rate.

Reviewing and analyzing shocking data: from 1986 to 1993, 19.000 Brazilian autopsies concluded that 95% of deaths by non-natural causes showed alcohol levels present in the blood. In Brazil, Alcoholism is associated with 50% of homicides and over 30% of suicides.

Recent releases describe that in 50% of traffic accidents deaths, either the victim or the driver had positive alcohol levels present in the blood results. Also, it was confirmed that 22% of deaths caused by cardiovascular diseases and 20% of cancer illnesses were related to alcohol use.

Analyzing the price tag of “alcohol vicious cycle”, in 2002 it was published that the estimated cost related to harmful alcohol consumption reached 655 billion dollars, almost 2% of the World’s GDP (Gross Domestic Product), an incredible figure.

Just to provide a general idea, a global study published by *The Lancet* - a science magazine - showed that around 4% of World Health Fund is dedicated to the treatment of alcohol-related diseases. Therefore, one can imagine the dimension of this expenditure. A further 4.1% of the Health Fund is spent on tobacco-related diseases and 4% on hypertension.

Facing the numbers related to tobacco and alcohol consumption is a “red alert” to any reader. The truth is that something is wrong! There are definitely missing parts in the World Policy’s puzzle against drug dealing and consumption. Some people believe that this lack or deficiency of procedures and actions is due to geopolitical reasons. Others contemplate the extraordinary revenue that these industries generate.