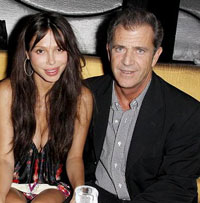 Mel Gibson (54) started the week single. The famous trouble maker and booze lover divorced his Russian wife Oksana Grigorieva (39). According to tmz.com, the breakup happened a few weeks ago. “They’re still friends and they’ll both raise Lucia together,” a close friend of the couple told People magazine. The couple officially existed exactly a year. On April 17, 2009, Gibson’s wife of 25 years Robin Moore filed for divorce. At the same time information was released that Gibson left his wife and seven kids for a Russian lady. In May they first appeared together in public, and in November that had a baby girl. Oksana also had a 12 year old son with Timothy Dalton.

The information was provided by Russian singer Nikolai Baskov who was the reason for the divorce. “Now we can openly state that we have been living in a common law marriage for 18 months. It would not have been nice of me to talk about it while she was married,” he told journalists. There was a rumor that Fedorova’s marriage was fictitious, and was designed to enable the German open a Russian business. There is no information on whether Baskov and Fedorova will be registering their marriage, but their engagement was discussed early in the year.

The third marriage to collapse last weekend was one of the most famous lesbian couples on the planet, Melissa Etheridge, 48, and her partner, actress Tammy Lynn Michaels Etheridge, 35.

Melissa Etheridge was formerly married to Julie Cypher and she gave birth to daughter Bailey, 13 and son Beckett, 11.

The relationship between Cheryl Cole (26) and her husband Ashley (29) has collapsed. According to Daily Mail, despite Ashley’s attempts to save the marriage, Cheryl decided to throw him out of her life for good. She has no intention of hiring a lawyer.

A source reported that the singer wants to do everything on her own, survive through the divorce with dignity and make it quick, quiet and painless. The only thing she wants from the 3-year marriage is a nine bedroom house and dogs.

Tiger Woods is a step away from a divorce (34). His wife Elin Nordegren (30) is not willing to forgive him for cheating and making her a laughing stock for the entire world. After his affairs became public, Woods lost his contracts with advertisers and had to be treated from sex addiction.

In his new black and white Nike commercial the golfer is talking to his dad who passed away in 2006. His dad asks him if he learnt anything lately. Woods’s wife thought these “memories” hint to the scandal.