The US citizen Torry Hansen, the adoptive mother of 7-year-old Artyom Saveliev, who sent him back to Russia on a plane, tried to adopt another child, in Georgia, RIA Novosti reports referring to ABC channel. 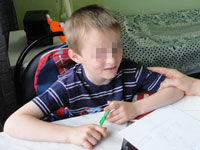 According to a source in the US law enforcement agency, Hansen applied to World Association for Children and Parents (WACAP), that helped her adopt Artyom, for the second time. The agency denied her request stating that Artyom had to live in her family for a while before she could adopt another child. Then she applied to another agency whose name was not released. There is no information as to at what stage the adoption was when she decided to send Artyom back to Russia.

The 7-year-old boy came to Moscow alone on a one-way flight with a note saying the adoptive mother was no longer willing to parent the child because he was supposedly threatening the safety of her family and allegedly threatened to burn down her house.

Hansen adopted Artyom in September 2009. Between age five and seven he lived in an orphanage in the city of Partizansk, in Russia's Far East, and before that he lived with his birth mother who was stripped of her parental rights because she had issues with alcohol. The boy’s father is not known.

Chuck Johnson, acting CEO of the National Council For Adoption, told The New York Times that Artyom Saveliev was a US citizen.

“The child is a US citizen. Parental rights are still in effect,” he said.

The National Council believes that Artyom Justin Hansen (his US name) should be returned to the States.

“I expected these statements. We were never provided any documented evidence that Artyom is a US citizen,” stressed Pavel Astakhov, the children rights commissioner. “If they have proved that the boy is a US citizen, in compliance with American laws they should bring criminal charges against his adoptive mother Torry Hanson. She left the child in a difficult life situation and sent him alone to another country. I can state that Ann Torry Hansen has not applied for citizenship for Artyom. This is why she sent him back when his visa expired.”

A delegation of specialists from the US will arrive to Moscow shortly to deal with the incident.

“We intend to discuss the issue of bilateral agreement regarding cooperation in adoption. I think that the US had to sign this document long ago and be interested in providing children’ safety. The document has to contain provisions regarding stricter control over the adopted children from both the US and Russian side,” Astakhov said.

Russian doctors did not find any behavioral issues with Artyom that his adoptive mother talked about, ITAR-TASS reports.

Anna Levitskaya, Director of the Russian Ministry of Education and Science, said in a Russian talk show that “The boy was examined by doctors, and his psychological status is absolutely normal.” She added that Torry Hansen went through required training before the adoption and could not be unaware of the adoption cancellation procedure. She said that “if American court system ruled Hansen’s request of the removal of parental rights legitimate, then, in compliance with the US law, she would have to pay relatively large alimony to the child for life.” Levitskaya is convinced that the reason was not in the boy’s psychological condition, but Hansen’s unwillingness to follow the legal route that would oblige her to pay alimony.

Meanwhile, according to Karina Krasnova, the family layer, the child’s adoptive grandmother addressed her with a request to reverse adoption. “She said that the family was no longer able to raise this child.” Krasnova said. Then the lawyer recommended her to appeal to the court with the request.

Despite the existing procedures of adoption reversal, last week the 7-year-old boy was sent from Washington to Moscow alone with a note addressed to the Russian Ministry of Education. The note said she no longer wanted to parent him because he was violent and had severe psychological problems: ”I was lied to and misled by the Russian orphanage workers and director regarding his mental stability and other issues ... After giving my best to this child, I am sorry to say that for the safety of my family, friends, and myself, I no longer wish to parent this child."