Who Strikes Gagarin's Name out of Russia's History?

The Day of Aviation and Cosmonautics celebrated on April 12 has long become an international holiday and a day to remember for everyone who works in the space industry. For the Russians, it is another reason to be proud. The problem is, Russians have increasingly worse memory of the event celebrated on April 12. Knowledge of space leaves much to be desired as well. 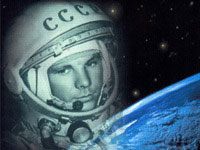 Who Strikes Gagarin's Name out of Russia's History?

These were the conclusions made by All-Russia Public Opinion Research Center, which, on the eve of the Day of Aviation and Cosmonautics, polled Russians about their knowledge of “near-terrestrial” issues. The first question was related to the event celebrated on this day – the commencement of the era of piloted space flights made possible by Yuri Gagarin.

The minority of those polled named the wrong date of the event. Six percent of the polled thought the first flight occurred after 1961, while two percent were convinced it happened earlier.

The Russians in the age group of 45 to 59 have a better knowledge of the issue (76% of this group provided the correct answer, 72% of them have college degrees). Every other person in the age group of 18 to 24 had no idea that it was a Soviet cosmonaut who first made it to space.

Another question asked was about the first manned lunar exploration. Every third Russian was not able to name the country that did it. The majority of these people were older people residing in provincial areas. One percent of respondents said the question was “dubious.” The correct answer, the USA, was given by 57% of the polled, while every 10th respondent said it was a Russian achievement.

The question about females in space proved to be difficult as well. Only three quarters of Russians were able to name the first woman who went into space, Valentina Tereshkova. Every fourth person acknowledged they did not know the answer. It is interesting that other names were not mentioned. Ninety percent of Russians of pre-retirement age and Muscovites and residents of Saint Petersburg with college degrees knew the answer.

As of beginning of April 2010, 54 women participated in space exploration, three of them are no longer alive. The majority of female space explorers (44) are Americans, followed by Russia with three female cosmonauts and Canada and Japan (two each). Great Britain, France and South Korea close the list with one female astronaut each.