Journalists wonder why silly and obscene signboards can often be seen in the streets of Moscow and other cities of the country. Many Russians complain that they may feel uncomfortable at times if they pass such signs with a child. 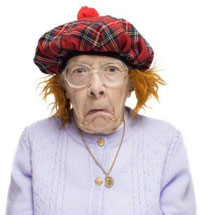 An entrepreneur has to visit quite a number of offices to coordinate the things about a signboard. However, officials mostly worry about the place where a signboard will be installed, rather than the things which it is going to say.

Many signs and billboards in the streets of Moscow contain spelling mistakes, some of the slogans used in the advertising can be very offensive to people, especially to the older generation.

In foreign countries, owners of such billboards and signs can be fined. In Russia, it is possible to file a complaint at the Federal Anti-Monopoly Service. No one does it, though.

For example, there is a resort center in the Moscow region called “Valkyrie”. In Norse mythology, a valkyrie is one of a host of female figures who decide who will die in battle. This word translates as ‘the chooser of the slain’. It is not clear how such a creature can be related to a resort complex.

Someone opened “The Guillotine” hair saloon near the place of public execution in Moscow. There is also a headwear shop called “Anna Karenina”.

Creative titles are plentiful in St. Petersburg, the cultural capital of the Russian Federation. “Death to Husbands” - women’s wear salon, “Idiot” and “The Traveling Bag of a Pregnant Spy” – restaurants.

Many people say that such titles can be uplifting and there is no need to treat them seriously. The titles mostly attract younger people, who like to joke. Older individuals will not prefer to visit the “Business Sausage” bar, for example.

“Such creative titles are fine, but everyone should know the limit. I still remember the horrid advertising slogan of a large retailer selling electronic goods. “I Suck for Kopecks” – that was the slogan which they used to promote a cheap model of a vacuum cleaner. We had to attract the anti-monopoly committee to remove the obscene ads from the streets. I’ve recently seen a cross street banner saying “They Fought for Our Fatherland”. It was congratulation to a sports team that won some tournament. Maybe we should not mix sport and the memory of war veterans here,” Irina Matysak of the Moscow Association of Advertisers said.