Today there are around six billion inhabitants of our planet, half of whom live in cities. A third of these live in slums (one billion people). The trend is not to diminish, but rather, to increase. Within 40 years, seventy per cent of the world’s population will live in cities and this will imply an exponential rise in challenges involving a huge range of social players. 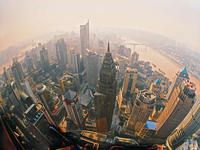 The massive influx into the cities over the next two generations will involve an exodus from rural areas and into urban areas which in many cases are already near saturation point.

The urbanization of the world’s population is more likely than not to increase the poverty burden, spread diseases and send crime rates skyrocketing. While the cities experiencing the first wave of this phenomenon will be the developing countries, a plausible knock-on effect could be a second wave hitting the cities of the more developed nations.

The information is released by the United Nations Organization’s World Health Organization, which on world health day (April 7) launched the alert that urbanization and poverty go hand in hand and that there are serious health issues to be addressed.

The main problem of this future trend is the multiplicity of the nature of the strains and stresses on society caused by a further 20 per cent increase in urbanized populations over 40 years, or two generations.

The reasons for the flow from countryside areas to the city are well documented and are nothing new. Job opportunities, the chance to grow, the need to break out of more conservative family and social constraints, to find something more challenging and more in line with increased levels of education have taken a growing ratio of young people from their birthplace to the cities over many decades.

The problems start to arise downstream, not upstream. And the more people that pour into the cities, the worse the situation may become, unless a great number of measures are taken.

Congestion leads to an increase in health problems and also to issues arising from crowding: traffic injuries are the leading cause of death in the 15-24 age group in cities and the second highest among the 10-14s.

As a result of increased pressure on public services, the rendering of healthcare and social problems is placed under increased risk and furthermore, rapid migration rates lead towards exponential rises in slum dwelling, involving other social vectors with potentially explosive results.

The UNO has decided to launch a campaign called “1,000 cities, 1,000 lives” which will incentivate municipalities to create conditions which can make a difference, channeling new residents into socially acceptable professions and living conditions, and making sure that their offspring are socialized for the recognized and established education system.