Once More, Cuba: What’s Behind the “Ladies” in White?

There is an excellent movie called Edukators, which interestingly exposes the conflict between capitalism and its opponents and that makes it very clear in the end, how to act in each. The kidnapped businessman unintentionally reveals friendly, with stories of his past similar to his rebel captors, but once free acts within the script to destroy, without condescension, the enemy that freed him. 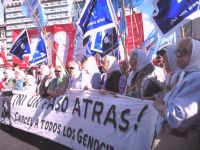 Once More, Cuba: What’s Behind the “Ladies” in White?

By Mair Pena Neto, Writing in the Direct

This movie came to mind for everything that has been seen in the media about what is happening in Cuba. People are even touched by the Ladies in White, poor mothers who just want to defend their children against the injustices of a cruel and murderous system.  But what lurks behind it is a machine to manipulate consciences again in full swing in another attempt to destroy Cuba. The little island a  few kilometers off the coast of the United States remains troubling, although not of any military or economic threat to the great neighbor empire or capitalism in general.

But like the Edukators, she touches the wound of constant complaint by the exclusionary model of capitalism and its consequences. She gives the example of internationalist solidarity with his universal health care and, while Obama approves an amendment which includes millions of Americans in the health system, although there are penalties involved and it still requires them to pay for the plans.

For the Edukators character, it will take eight years of his life to pay for the repair of the Mercedes of the businessman, after an accident in the street of the ultra capitalist Germany, as the American citizen is delivered to their fate because they cannot afford a health plan. It doesn’t matter that it is a similar one. Capitalist society is not for the unfit. It is exclusionary in nature.

It was not aimlessly that, to emphasize the point, Michael Moore in his film, Sicko, led Americans to Cuba who could not act on their own. There, health is not a commodity and each person is considered in their individuality. And that is in a poor country, blocked for 40 years, with extreme difficulty of obtaining hospital supplies, surgical equipment and medicines. In Cuba, everything is more expensive and more difficult. Simply because they cannot buy hardly anything from their huge neighbor and need to bring things from much further away.

Cuba, with all its faults, is proof that another world may be possible, and that is precisely what bothers you. For that we must defeat it in the field of ideas, the world's collective imagination. So we now have the new offensive and construction of the Ladies in White, some perhaps manipulated in their naivety, others paid by the group from Miami that went to the streets in solidarity, revealing the character of the movement.

But unlike them, the Mothers of Plaza de Mayo, who march for their missing and tortured children and were repressed by the forces of the Argentine dictatorship, are surrounded by the people of Havana who do not tolerate cheap manipulations.

This avalanche of information on dissidents as victims and innocent Ladies in White are just another attempt to pave the way for change in Cuba, as many have tried over the past five decades with the most different and varied methods. Only the island, like the Gaulish village of Asterix before the Roman Empire, is not going to be defeated and still counts on widespread international solidarity.

A human value unknown to capitalism.