To Confuse the Wood with the Trees ...

Much of the news coming out, in the effort to disguise ideological propaganda, contains the fundamental error of mistaking the wood with the trees ... especially when the aim is to denigrate. That is, from an isolated case, preferably rough outlines, and generalized in order to induce the reader to think that the whole is of the same nature. This generalization obviously has ideological connotations and follows a political agenda that seeks to deconstruct traditional society and all its secular institutions and to impose a New World Order after the manner of the sinister interests of the international oligarchy, the same ones that handle the financial markets and through them, largely control the global economy. We refer to cases of pedophilia within the ranks of the Catholic Church recently publicized by international news agencies. 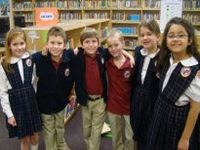 To Confuse the Wood with the Trees ...

Indeed recent reports of pedophilia involving priests have the outlines of information that journalistic ethics require, regardless of their moral gravity. Such stories raise suspicion about their "goodness" even among non-Catholics like us. Although disagreeing with the doctrine of the Catholic Church, in some respects, but we recognize the importance of their role in our history to defend the ethical values that shape our Judeo-Christian culture and their social merit on behalf of those who have been victims of the usury and greed of the international oligarchy, which is after all more interested in destroying Catholicism and religion in general, as they constitute a serious obstacle to achieving its goal, which is to reduce mankind to the status of robotic slaves.

We emphasize, beforehand that it should not be confused with defending pedophilia, that by making the defense of the Catholic Church we are not justifying the actions of dishonorable men who have forgotten all of their most basic obligations as priests, respect for others, especially the weaker, as is the orphan child, lacking the affection of a true family.

One aspect that makes us suspicious of the "goodwill" of these stories is that they focus exclusively on cases of pedophilia of Catholic clergy, when we know that addiction cuts across all religions and organizations. We find it in all social strata and even within families. The pedophile is in principle very close to the victim and their confidence, that is not a stranger ... and may even be a father, uncle, etc.. When it is argued that priests are more prone to abuse because of the celibacy that is required, as they repeatedly try to justify the temptation toward sexual abuse, it seems to be forgotten that these buggers are not always single and are often seen as "good" heads of the family, so the person apparently seems normal.

Another detail that suggests that a campaign of demoralization of the Catholic Church is in motion, is that news of pedophilia within it appears like mushrooms born every morning, confusing the number of victims and the pedophiles, it seems they are as many as a hive of bees ... Almost all of the Catholic hierarchy ... Of course, this does not exonerate the perpetrators of sexual abuse.

In fact the victims are many, but the alleged abusers are only a tiny minority. Of the evil, better ... Even if we take into account the statistics in the USA, the number of victims in Catholic institutions compared with others, particularly in the school environment where it is much higher, there is a ratio of 157 to 1, within a time period 52 years, 1950 to 2002. Is it difficult work, no? On the other hand, this disproportion shows that in the U.S., as child abuse is an extensive social phenomenon, that is, that is not restricted to a specific sector of society.

The case of the Casa Pia de Lisboa is also illustrative as to the definition of a pedophile. The Portuguese government orphanage, founded in the late eighteenth century, by the Manager of Police, Pina Manique, a man in the confidence of the Marquis of Pombal, was a process of pedophilia in progress, and brings together more suspects accused of sexual abuse of minors than in all the cases mentioned recently in the media to tarnish the image of the Catholic Church.

Ten defendants were indicted by the public prosecution service,including an accomplice. Nevertheless some say that a "sexual binge" at the Institute involves many people and quite big, since it goes back over a decade ago in the 80's of the last century and many of the victims, now adults, are not willing to go through the torment of police investigations and still less the public shame that they have been the "rent boys" directly involved in the process.

There is a note in support of truth, that not all complaints are genuine. There are those who take advantage to extort money. It maybe difficult to ascertain how much is the truth and where does the lie begin ... either one side or the other. Moreover, it is noted that in issues of sexuality, such as sodomy and others, it always tends to occur in boarding schools, even among the confined, although they are severely repressed, it also leaves indelible marks for the rest of their lives.

The fury of the anti-clerical secular lobby goes so far as to revive old cases like that of Father Lawrence Murphy, back in 1975, to address the current Pope insidiously and in this way, the very Roman Catholic Church. On 25 March of this year, the prestigious New York Times published an article that allegedly accused Benedict XVI of covering up for the priest from Milwaukee in 1995 when the Pope was still Cardinal and responsible for the Congregation for the Doctrine of the Faith It must be motivated by a very strong hatred of Catholicism to raise this issue 35 years afterwards...

The complaint is all the more insidious when it ignores all that this body has had is the specific function to monitor doctrinal deviations, heresies, so nothing to do with the Law, which deals with cases of indiscipline, as are the acts that violate the chastity of the clergy are required. It is ignored that this priest was acquitted by civil law, which did not find evidence of the practice of pedophilia on deaf boys who were protected. How aware are we made that the Catholic hierarchy kept him under surveillance and did so not so much for suspicion of sexual abuse of minors, but for doctrinal deviations. It was this and only for this reason that the then Cardinal Ratzinger, in 1995, sanctioned, and then limited his pastoral functions. Four months later Murphy died. We do not believe that the New York newspaper was absolutely unaware of these facts. From here, it follows that bad faith exists and a defamatory smear campaign has been articulated against the world Catholic hierarchy.

And it is understandable. The current pontiff, consistent with the principles of the Catholic Church, has developed a tenacious resistance against unnatural and divisive proposals, carried out by secular organizations seeking to impose a vision of a sexist, hedonistic society, reducing man to his animal nature to deny its spiritual dimension. These organizations obviously have not arisen by "spontaneous generation," or live on air ... they have been created and are supported by the cunning of said philanthropic foundations like the Rockefeller family. The financial interests of those are linked to a wide range of economic sectors ranging from banking, oil, pharmaceuticals, military industry, etc., to audio visual media, including the "media", which clearly meets an agenda dictated by the Global Elite to which they belong.

Besides, who is it that postulated that humankind has to be reduced to 1 / 3 of the current population and contributes to the misery of millions of human beings and cannot see the charitable activity, specifically in areas where poverty is most felt, sometimes coinciding with rich subsoils operated by the same Global Elite.

Therefore there is an intention in this kind of news that goes far beyond the desire to tell ... If the same phenomenon were not omitted in other similar institutions. Further, a balanced assessment of responsibility in Catholic Church pedophilia should refer to the canonical and civil cases that have been raised for clerics accused of sexual abuse of minors and their outcome, not just advertising complaints, which may not be genuine, as has knowledge in processes of this kind.

Author`s name Oksana Orlovskaya
*
18:01
Putin: Merkel confirmed Russia made the right decision
15:58
Merkel's remarks about Minsk Agreements were 'petty and disgusting' – Lukashenko
15:02
Viktor Bout says he did not come across Russophobia in US prisons
12:02
Massive fire burns OBI hypermarket at Mega Khimki Shopping Mall to the ground
16:48
US basketball player Brittney Griner exchanged for Russian entrepreneur Viktor Bout
16:31
Zelensky believes Ukraine conflict may end in 2023
20:46
The West is expecting, but not pressing Russia-Ukraine talks
18:27
Putin: The threat of the nuclear war is rising, why deny it
17:17
Ukraine modenises Soviet Tu-141 Strizh drones
15:24
Ukrainian combat drones capable of flying at speed of sound may strike Siberia
Polish writer shocked to find out Russians will not rise to topple Putin