Last weekend, Anastasia Virganskaya, a 23-year old graduate of the Moscow State University of Foreign Affairs and a younger granddaughter of Mikhail Gorbachev, married Dmitry Zangiev, a 24-year old PR professional. Dmitry graduated from the University for Eastern Studies and is now a post-graduate student of the Russian Civil Service Academy and a PR professional at the agency working with Louis Vuitton and Max Mara Fashion Group in Russia. 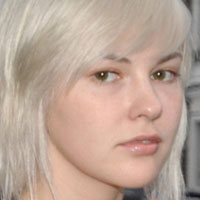 Dmitry entered one of the most elite restaurants of Moscow near the Bolshoi Theatre at noon on Saturday, March 20th.

He was personally involved in the decorating process to ensure everything went smoothly. He brought 20 boxes with white roses and decorated the gazebo. The couple registered their marriage in the restaurant instead of a common procedure in a registry office.

The bride arrived in a black luxury Mercedes shortly after 7pm. Before the wedding, Anastasia changed her image, turning into a stylish brunette from a glamorous blond.

Anastasia Virganskaya wore a classic white wedding gown with a veil and a puffy skirt, held by a bridesmaid.

Closest friends of the Gorbachev family and the couple gathered in the restaurant. There were no celebrities among 50 guests, except for the designer Igor Chapurin, who arrived at the end of the celebration.

One of the first guests was Mikhail Gorbachev accompanied by his daughter Irina, his older granddaughter Ksenia and her husband, ex-manager of the singer Avraam Russo, Dmitry Pyrchenkov.

The first toast was offered by the bride’s grandfather, Mikhail Gorbachev.

The official ceremony was followed by dancing. The bride left the quests for a few minutes to change into a light cocktail dress.

The bride’s grandfather left the celebration at 11pm, followed by his daughter, Irina Virganskaya.

The bride’s sister and her husband left after midnight, while the newly married couple and friends celebrated until morning.