The international community can finally welcome the U.S.A. into the 21st Century. President Obama, and House Speaker Nancy Pelosi, can be called the hero and heroine respectively of this successful effort. Both had come across a brick wall, known as the corporate elite, composed primarily of the insurance lobbies, who were spending massive amounts of money for the lies, propaganda and fear tactics that were employed. When the final vote was cast, 219 voted for (216 were needed) and 212 were against. 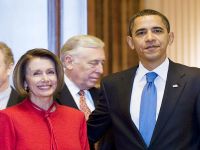 Opponents were howling that health care reform was tantamount to imposing socialism or Communism on Americans, the dreaded "socialized medicine"...as it is, 18,000 Americans die for lack of health care every year. The bill means that 32 million will finally receive a measure of health care security.

House and Senate versions of health insurance reform consist of the following:

* Insurance reforms to protect consumers from insurance company worst-practices – like denying coverage based on pre-existing conditions, capping total coverage, and dropping or watering down coverage when you get sick and need it most

* Consumer protections that will restrict how much of premium dollars insurance companies can spend on marketing, profits, and salaries

* Affordable health options, with subsidies for working families and a hardship waiver

* Making preventive care completely free – with no co-payments or deductibles

* Lowering the cost of health care for seniors

* Improving the quality and extending the life of Medicare

* Ensuring that reform is not only fully paid for, but actually significantly reduces the federal deficit

Ironically, one of the areas of attack used by these charlatans was COST. Who do they think they are kidding? Never once was the cost brought up of maintaining troops of occupation in Iraq and Afghanistan, in the trillions of dollars, nor of the cost of maintaining nearly three hundred military bases worldwide for purposes that are yet to be explained rationally.

Odd that the country that thought nothing of pounding the living daylights out of a defenseless, innocent Yugoslavia, then Iraq and Afghanistan...was deathly afraid of providing a vital social guarantee for U.S. citizens, one that is taken for granted in every civilized, developed country of the world. A nation deeply in debt, forty-three cents out of every dollar spent by the U.S. government is borrowed and drives the nation deeper into debt.

Republicans singularly created a spectacle with their unwillingness to compromise, the group that doles out millions and billions of taxpayer dollars for weapons, wars, occupations and foreign "aid" to rogue states, such as Israel. One unidentified Republican was heard to call out to pro-life Democrat Bart Stupak (Michigan) "baby killer" after years of Mr. Stupak being thought of as the life saver of the pro-life movement. However, Mr. Stupak's vote certainly affirmed his commitment to the lives of his fellow citizens.

If Republicans can initiate a huge campaign similar to the one used to defeat the measure, with all of the scare tactics, the "yes" vote may cost some Democrats their jobs. This fact made the vote all the more significant.

After the victory, President Obama addressed the nation on television.

"We proved that we are still a people capable of doing big things," the president said a short while later in televised remarks.

“This isn’t radical reform, but it is major reform,” Obama continued.

The night will go down in history. Many disadvantaged Americans will perhaps for the first time in ages sleep with a sense of security. For the poor, disadvantaged, uninsured, unemployed, working poor, self employed, tonight they would say to their President, "Thank you, Mr. Obama!" Indeed it is a proud accomplishment that those before him were unable to achieve.