The Vatican will establish a special committee to investigate regular appearances of the Virgin Mary in Bosnia and Herzegovina. The first sighting took place in June 1981, when six children said that they had seen the Virgin. 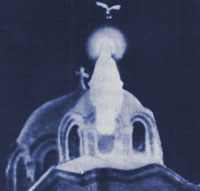 An international commission of inquiry headed by Italian Cardinal Camillo Ruini - a top adviser to the late Pope John Paul II - has been formed to study the case and report back to the Congregation for the Doctrine of the Faith, the AP said.

Numerous eyewitnesses say that the Virgin Mary descends to the Medjugorje shrine in southern Bosnia. People say that they could see her there floating on a cloud. She appears to be dressed in either gray or gold clothes. They say that she talks to people in the Croatian language: “I cam here because there are many true believers here. I want to be with you to enlighten you and reconcile the world.”

Her messages – epistles - have been translated into all basic languages of the world. Eyewitnesses say that her apparitions are preceded by three flashes of light. However, the Catholic Church questions credibility of the sightings, the BBC said

People continue to visit Medjugorje while the Vatican investigates the apparitions of the Virgin Mary. Thirty million people have already visited the small town in Bosnia since she was seen there for the first time.