Moscow’s Committee for City Advertising harshly condemned anti-tobacco posters depicting a sleeping baby with a cigarette put down against her back. The campaign, specialists of the committee said, went beyond the framework of ethical norms and promoted abuse of children. 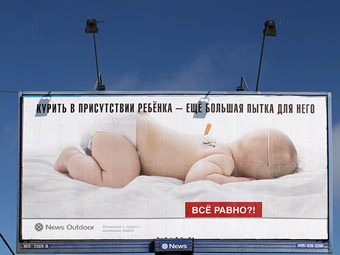 The infamous billboards appeared in Moscow in March. They depict a sleeping baby with a cigarette butt put down against her back. The slogan on the billboard says: “Smoking in child’s presence is a much bigger torture for him.”

“Any normal person will be disgusted with what the picture shows. But if thousands of children have a chance to stop inhaling tobacco smoke every day, we believe we could sacrifice our visual comfort for that. When a smoker lights up a cigarette in children’s presence, she should realize the pain that her habit causes to them. We believe that this campaign sends a strong social message that leaves no one indifferent,” a spokesman for the advertising agency said.

The social campaign under the slogan “You Don’t Care?!” was launched in January with the “Bullet” poster. The poster depicted a lit cigarette with a bullet flying out of it. The slogan on the poster said: “When you inhale, you kill yourself, when you exhale, you kill others.”

The campaign was designed to attract public attention to such big issues as health, ecology and drivers’ responsibility.

The Moscow government also intends to take tough measures to rescue Muscovites from cigarettes. Moscow officials discussed a possibility to ban smoking in cafes and restaurants of the city.

Restaurateurs supported the idea. Spokespeople for the tobacco industry suggested ending tobacco advertising in the Moscow subway for a start.