Saint Petersburg celebrated the beginning of spring with chunks of ice falling from roofs, leaking rooftops and ample snow and water on sidewalks and roads. In downtown, people were trapped between water and mountains of snow. They had to jump from one snow island to another to get where they needed to be, Zaks.ru reports. Rubber boots became very relevant, and people get in long lines to get a pair. Ice on rooftops is extremely hazardous. Walking around the city may require a helmet, since 63 people have been injured by fallen ice and three died. Many old buildings have leaking rooftops because the snow that has not been timely removed is not melting. City residents blog about their futile attempts to get the attention of utility companies and Ministry of Emergency situations. 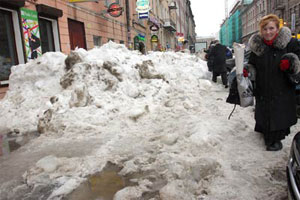 Residential buildings are not the only victims of water dripping from the rooftops. Some architectural monuments of federal significance suffer as well. The exposition of the memorial museum of the academician Ivan Pavlov located on the second floor of the historical building and containing paintings of Vasnetsov, Nesterov and other famous artists is threatened.

In the building on Rubenstein Street, 23, the water has reached the third floor, and the residents walk around their own apartments through ankle-deep water. The building, constructed in 1911-1912, is a protected monument, and very famous people used to live in it, including American writer John Reid and Russian writer Sergey Dovlatov.

Another spring problem is melting icicles and icy mounds dangerously hanging from the roofs. On the last day of February, two women were injured with icicles, and a day earlier another woman was killed.

Last Saturday was a record-setting day in terms of number of people who suffered from ice and snow mounds fallen from the roofs. On February 27, 13 people were hospitalized. A middle aged woman was hit by an icicle. According to a police report, the part of the sidewalk where the woman was hit was enclosed with a ribbon, but the woman disregarded it and walked through the enclosure. Later, a witness stated that the enclosure was installed after the woman was hit.

Saint Petersburg residents express their frustration with the situation on LiveJournal and online forums:

“There has to be a new type of shoes for these conditions. Something like rubber boots with spikes, armor-clad sole, etc. A helmet is required. Yesterday I went to visit my parents. It was awful! There were human-size ice mounds sitting on the only walkway to the building, and they fell down from the roof! The same size icicles are hanging from the roof. I was crawling on the walkway, praying that the icicles don’t fall, because there was no place to run. I have no idea how my poor old parents walk there. I’m afraid for them. What about people on crutches or with kids? That’s horrible !”

“On Saturday I went to a concert in downtown. I was stunned with the amounts of snow and water both on the sidewalks and on the road. It looks like they haven’t cleaned the snow at all this winter and their snow equipment that worked at least a little bit in the beginning of winter just finally broke.”

The city residents are trying to save themselves with rubber boots. This type of shoes became very popular, and people spend much time standing in line to get a pair. The other day a line of 100 people formed in front of the factory manufacturing rubber boots. One of the stores specializing in rubber boots is closed because all boots sold out.