Man Goes To Court To Prove He is Not Dead

A weird story proving the absurdity of bureaucratic approach took place in Russia’s Yakutia Republic. A 55-year-old male local resident was listed as dead for eight months over a mistake at the registrar office. The man had to go to court to prove that he was actually alive, RIA Novosti reports. 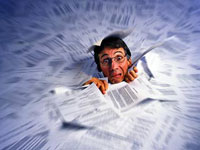 Man Goes To Court To Prove He is Not Dead

The man was declared dead on July 20, 2009. He learned of his own death after he had to go to hospital. The man’s relatives were supposed to collect a number of documents confirming his physical condition of a disabled person. They went to the pension fund, where they were told that the man, named only as Nikolai, had already been dead.

The stunned relatives went to the registrar office to report the mistake. They had to visit many offices and conduct a number of inspections, albeit to no avail: the people could not prove that the man was alive. In the end, they addressed to the Commissioner for Human Rights in the Republic of Yakutia.

The “living dead” was shocked with the story, although, luckily, the bureaucratic crusade had not affected his condition.

Nikolai went to the registrar office himself, but he could not convince the officers that he was not dead. The court eventually ordered the office to cancel the man’s death account.

Bureaucrats have not provided anything to compensate the man’s material or moral damage.

The court hearing was held on February 26. However, the man will be officially pronounced “alive” only ten days afterwards – if the registrar office does not appeal against the court ruling. Therefore, the man will finally obtain his sought-after permission to live only on March 8, when Russia celebrates International Women’s Day.